Man, I love games that try to do something unique. Some would call me a sucker. Designs like The Grizzled and The Mushroom Eaters dig into my brain and wrap their claws around soft tissue, refusing to be dislodged. This is why I had all the hope for Fog of Love to burrow down into the most imaginative parts of my cerebrum. But the magic never happened. Like the most predictable of rom-coms, it doesn’t manage to break through or achieve greatness.

Yet just like Jake Gyllenhaal, it doesn’t know how to quit us. This relationship simulator is awash with interesting quirks and details. The setup of a two player game with a couple trying to feel out their conjoined existence is endearing. As cards are played and scenes unfold, the simultaneous answering of questions manufactures engaging moments laced with a bit of drama as you explore unknown territory.

That concept of ‘relationship simulator’ is pretty kooky and something I can totally get behind. On paper it’s pure potential, able to fork off into existential discovery or skip about in lighter social reverie. Newcomers approaching the game have no idea what to expect, and that’s wonderful.

It even starts off with a fastball. There’s this quaint character generation system that parrots aspects of the tabletop RPG genre. You’ll get an interesting and sometimes humorous career such as a florist or a dancer. You pick several personality traits which function as hidden goals, offering guideposts for play and directing your decisions. It’s fantastic in its simplicity as well as its depth of what it accomplishes to set the stage.

Sometimes it can be very odd. When you’re saddled with a trait like ‘wears cheap jewelry’ you’ll immediately form a preconceived notion. We’re used to feeling exaltation and excitement due to our barbarian’s 18 strength or thief’s 17 dexterity. When we’re offered a personality that we connect to primarily through pity, it can be bewildering and uncomfortable. And that’s great as it challenges our personal character and naturally questions our feelings. These difficult compositions can help cement a tender relationship with not only our in-game extension but the design itself.

An insurance agent with a facial scar, old cell phone, and odd socks walks into a bar…

Unfortunately our relationship begins to show cracks early. Right from the get-go you’re humming along and energized, maybe even butterflies buzzing back and forth against the walls of your stomach, and you begin to embody this fresh-off-the-boat personality. You want to explore the budding couple and engage in those roleplaying elements that are presented so succinctly yet effectively.

Then those pesky questionnaires start to pop up. Each scene presents you with a four option multiple-choice question that both participants answer privately. As hinted at previously, this feels really spectacular at times. You want to lean into the RPG qualities of the design and explore two human beings attempting to find their way.

When making crucial decisions in these moments, which is what the majority of the game consists of, you really want to approach the experience from an emotional angle. Relationships are messy, unpredictable things and you often have to take a deep breath and close your eyes as you leap. The far away outcome of these life defining moments is never known. Uncertainty eating away at our everyday life is a common occurrence and what defines our short little existence. Fog of Love rarely feels this way. More often, you’re responding to those pop quizzes from a strategic vector as you desire a specific mechanical outcome.

With the scene set and the trip to Ikea mid-occurrence, you’re less concerned about what Barry the electrician is actually feeling and more focused on raising your discipline or sensitivity, as well as your personal satisfaction. The mechanisms are bare and fallout from the decision process so stark and cold that it saps the emotional strength at nearly every turn.

By presenting such a strong focus on the defined results, Fog of Love loses its way just as soon as its begun. It struggles under its goals of coupling roleplaying with a strategic Euro-style design, an uroboros devouring itself as both ends meet. These two vectors possess such disparate design goals and philosophies that reconciling the two is impossible, and this game never quite manages the impossible.

To be fair, the issue is partially alleviated in later scenarios. By introducing the ability for the relationship to dissolve, there’s a shift to mechanically nurturing your opponent’s goals. That aspect of cooperation and thoughtlessness can certainly exist without this prompt, but this is usually adopted outside the bounds of your incentives and for pure narrative or emotional reasons. Ideally, the game would nurture those emotional proclivities instead of hampering them. Some of the evolving mechanisms and scenarios make it halfway, but they never supplant that sterile calculating base completely. While you will have moments of concern for your partner and perhaps struggle with indecision, the majority of play is still framed around those individual needs and accomplishing them. 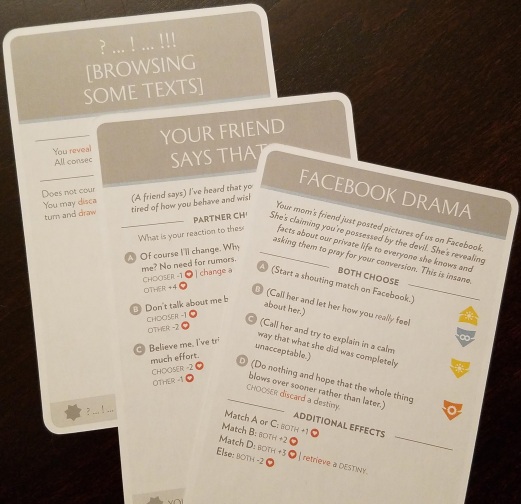 Save the drama for your momma

Tone is also problematic. The game wants to see-saw between moments of smirking comedy and dramatic impact. This dichotomy is fragile at times as it can feel like Will Ferrell being directed by Terrence Malick. While this variance of atmosphere can lead to some of the strongest flashes of roleplaying, it can also undercut the emotional depth and pull you out of the flick in the midst of your engagement.

There’s a nagging feeling that the gamification of love is folly. By laying down strict goals and measurements, Fog of Love can’t help but judge your character – by proxy you – and their success in pursuing a very nebulous and subjective state. I certainly think the attempt is noble and at times impressive, but the impact and emotional characterization leads down a path that jails creativity and feels oppressive.

This can also be an experience that melds in uncomfortable ways with the outside world. The sheer possibility of this occurring sounds enticing, and it’s something I regularly praise in a design when it’s able to affect us on a greater level, however a couple with a troubled relationship may find their unresolved issues weaving into the play-space. I’d like to think that this can give way to resolution and a deeper sense of affection, but this is a subject that is extraordinarily tricky and walks upon dangerous ground. Combine this fragility with that gamification aspect, and you have an exercise which can offer mixed messages with a judgmental tenor. Let’s just say there’s a reason a relationship therapist charges $100 a session and Fog of Love retails for $50 at Wal-Mart online.

Despite this flurry of criticism, there’s quite a bit of turmoil and conflict raging within my mind. Fog of Love does present moments of profundity as you and a spouse perhaps deepen your understanding or stumble upon new realizations. These moments are special. In those brief glimpses this game achieves a status of art that is highly commendable. These experiences end up justifying the design at a base level, earning its time for at least a couple of plays. 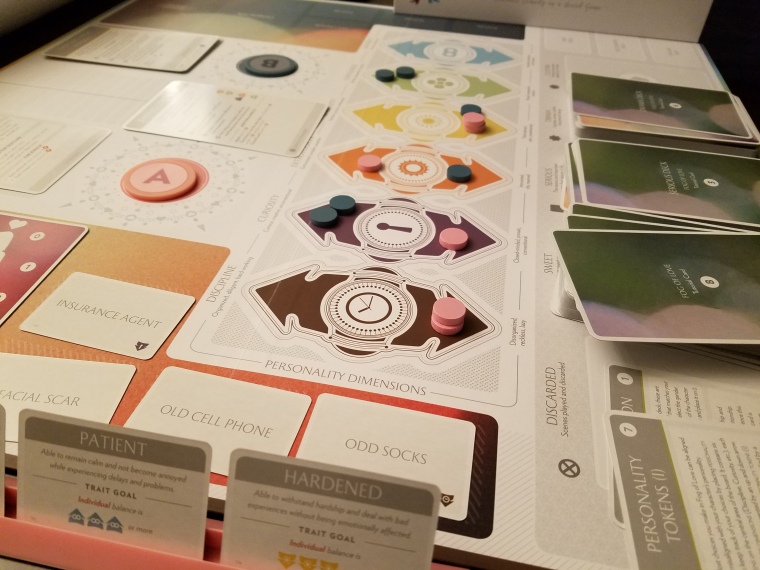 It’s also obviously lovingly crafted. The presentation is clean and crisp. The components are fantastic from the solid chips you can’t help but play with nervously, to the unveiling of scenarios through sealed decks of CCG-like boosters. Hush Hush productions and designer Jacob Jaskov come ever so close to presenting the real deal.

While the core of Fog of Love is singularly flawed, this is a design I’d recommend be experienced. Its deficiency is not in failing to present an interesting game, but in taking a leap of insight and failing to stick the landing.

← A Review Philosophy
The Curse of the 7th Continent →

12 comments for “Fog of Unrequited Love”