7th Continent, Lords of Hellas, Warcults – these are all big damn games, some with a volume of hype that’d please the ears of Nigel Tufnel.

Yeah, maybe this small box racing game doesn’t quite fit. But I need to expel some thoughts so I’m going to write about it this week. Hopefully you’re going to read about it.

First of all, let’s make this clear: Gretchinz! is not a terrible game. Despite that, this is going to be harsh and maybe hurt a little. The truth is that it’s simply mediocre. It’s one of those titles that helps reinforce our perspective on truly special designs. Thank Gork (or Mork) for perspective.

I’d urge you to buckle up, but you can’t actually die in the world of Gretchinz! so who cares.

I don’t know much about Devir games but I do know Roberto Fraga and Yohan Lemonnier. This duo brought us the exceptional Captain Sonar, a title that boasted legitimate innovation and emotional highs. I love me some Captain Sonar like I love me a Butterfinger or a Clint Eastwood western. I think you get the idea.

Gretchinz is no Fistful of Dollars. It’s more of a Francis in the Navy. Yeah, look that one up.

This game fails to make any meaningful impression because it’s soft and never commits. It’s stripped so bare that it’s offensively inoffensive. You roll some action dice in real-time, a player yells “WAAAGH!”, and then you take some turns shuffling these 3D carts down the field. Every time it approaches a moment of clever it shies away and doesn’t engage.

Real-time games are great when the novelty is utilized effectively. Here, it all feels relatively pointless as a player can simply end the proceedings a half second into the action. Think about that for a moment – if your first roll is good enough, you can immediately stop everyone from attempting to manipulate their results. This guts the tension because it removes any solid sense of footing from the decision process and deflates agency. Instead of nervously waiting for the sweaty-palmed tumbling of dice to end, we’re often waiting for it start. 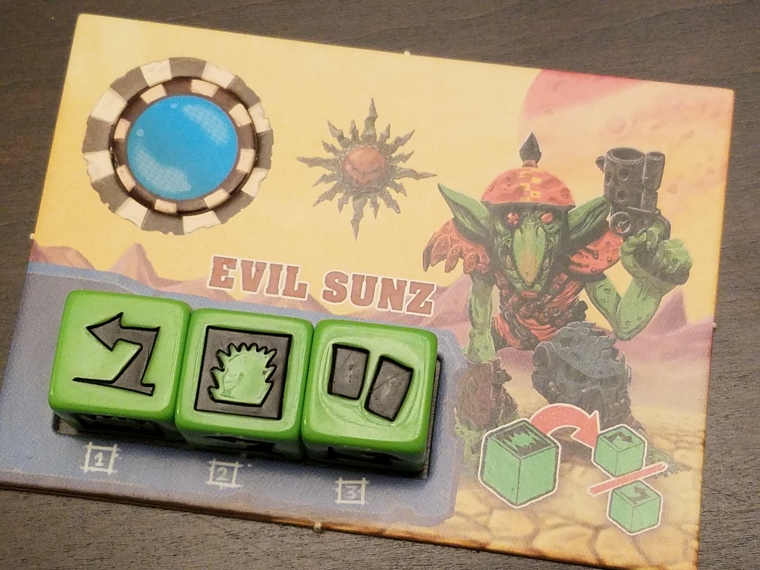 Then we take turns moving. You can only move forward at a diagonal, I suppose because your little brainless gits are drunk. Perhaps I’m projecting here ’cause if they ain’t hitting the bottle you definitely should be.

Oh this game wants to be zany; you can feel it. Attacking applies this Hanabi-inspired system where you choose cards from your hand to function as the result. The catch is of course that you can’t look at the face of the cards you’re holding. So maybe you have a jam and a malfunction alongside three hits. You pluck two from your assortment and both must be successes to nail that green little bastard in the lead. If even a single card is a dud, then you instead take the damage and play moves on.

A couple of design elements interact with this mechanism to try and offer a degree of control. One of the action die results forces another player to tell you how many hits you possess. Additionally, one of the terrain cards you move over allows you to draw a couple of cards and view their faces before stashing them in your grip.

The problem is that the design duo continually fail to leverage assets. The shooting is very inconsequential as you deal a single token of damage to an opponent. Until they’ve accumulated three it means zilch. Once they’ve hit that number they lose a turn and have to watch everyone else attempt to have fun. This is extraordinarily unfulfilling for both the shooter and the mark.

This design also fails to leverage that excellent 40k setting. Gorkamorka meets Mario Kart is an absurdly promising concept. This game flattens both to their base molecules and plucks the most bland particles of each. It has a 40k veneer but it doesn’t play like anything we’re accustomed to in that regard. We expect crazy abilities and wild Ameritrash chaos. It’s unfathomable to craft a greenskin racing game that’s bland and lacks any sense of narrative juice. This should be a game of vrooms and booms but it never gets there. 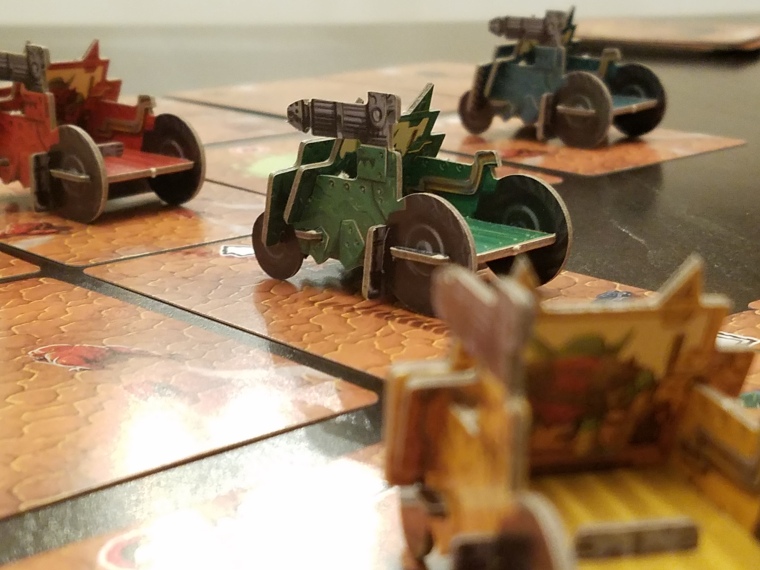 There are moments where Gretchinz! will force a smile. When your dice align and another player is stuck programming a lackluster set of actions. Or when that empty noodle across the table draws a hand of malfuctions. However, this game was not designed in a void. It’s sitting there on my shelf – momentarily – competing with a legion of quality designs. Phoning it in doesn’t cut it. Not if you’re Roberto Fraga and not if you’re Jim the homeless guy turned board game designer.

It attempts to be a light social affair where perhaps the players are expected to dig into the setting and elevate the experience. Yet this never occurs because there’s very little to backup that trash talk or negotiation.

“You better get the hell out of my way or I’m going to shove my cannon up your green sphincter.” – Some poor dude stuck playing this game.

“Fine, I take one damage.” – Some other dude who doesn’t care.

Unfortunately, I don’t feel better. I simply feel empty, like a box called Gretchinz! A box whose only distinction is being the worst release tied to the Games Workshop intellectual property.