A person walking briskly past could easily mistake Rising 5 for a Guardians of the Galaxy product. This is with purpose, of course, as they want you to think it’s those fellas and that rabbit. In this wannabe Summer blockbuster players cooperate to re-seal the Rune Gate and vanquish the brutal monsters that have emerged. If you can accomplish all of this before the Darkness Level reaches the Red Moon, the planet of Asteros will be saved and the Rising 5 will become legend.

What a glorious setup.

Rising 5 is fluffy. This cup of pudding is a half hour co-operative design that sits comfortably in that realm of the hobby that Pandemic trailblazed. It’s a breezy experience mechanically that offers alluring visuals and a central puzzle that needs a-solvin’.

That conundrum is the heart of the game. We must deduce which four of the eight rune tokens are required to lock the buzzing gate, but we must also determine their correct position.

The companion application is your savior as it will offer feedback based on placement. We’ve seen this common puzzle before – in Mansions of Madness and outside media – where you receive positive indicators on how many of the symbols you’ve placed belong in the solution, as well as how many are in the correct place. It’s simple deduction that basically eats up in-game time and helps to impart a sense of clever when it all comes together.

But that ain’t happening.

One of the primary conceits of Rising 5 is that it doesn’t shed a tear for your goody two shoes ass. It will grind you into the Asteros soil and leave you for vulture-feed (or whatever their alien equivalent is). This game is flat-out hard and you will fail, again and again.

And this is a good thing fellow masochists. A co-operative design that doesn’t tickle your groin with a steel-toe is one that’s not worth playing. Challenge is the primary component to these types of puzzle-y whack-a-mole designs and this one gets it right. It falls amongst good company in this regard, harkening to humdingers such as Space Hulk: Death Angel and Ghost Stories.

The central code breaking is also a more engaging challenge than the type of strategy assessment found in Pandemic. It offers more tangible progression due to continual feedback with a pat on the tummy. It’s less about deciphering the state of the board and more about pushing towards that next step.

The card-based action system supports the internal economy well. You’re in a full out sprint racing for that solution before Darkness wins out. There’s no slow buildup or crescendo, it shoots you out of the cannon before you’ve even settled into the barrell.

Managing that action economy is the vehicle for player agency in this design. There’s a conflicting sense of identity within this system, however, as players have no specific representation within the game state. Instead, everyone shares the Rising 5 crew, performing actions with whoever they’d like pending available cards (actions) in their mitts.

This lack of ownership can soften investment in the narrative as players assume a more authorship-centered role. This does breed some decent communication at times, but it can be disconcerting for someone wanting stronger presence on the board. 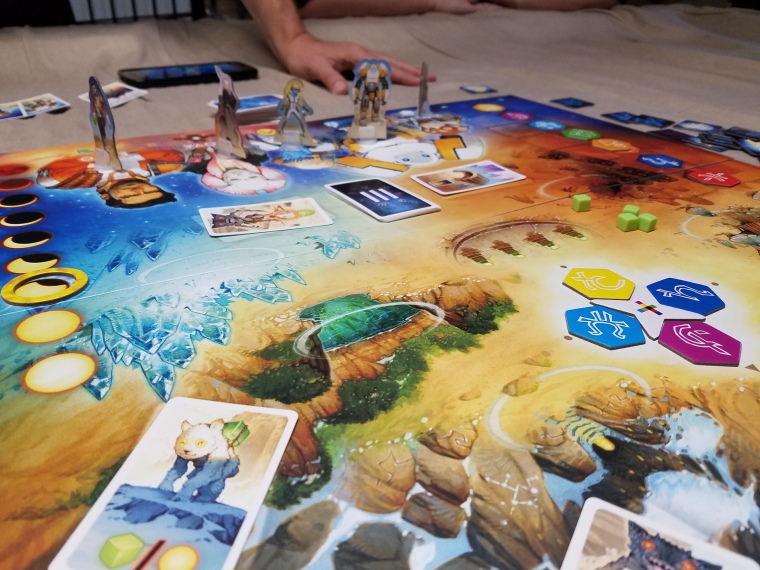 While communication and strong play are absolutely required, this game suffers due to its inherently light nature. It feels perhaps overdeveloped and stripped of a layer or two, resulting in thin gameplay that does not support the decision space for more than a couple of players. Even at three and four participants there’s simply not enough to do or collaborate on to keep your interest, which is frankly disappointing. Sometimes you want to bring all your mates to see the film and now you’re stuck having to choose your favorite.

That sense of overengineering really hampers this work. There’s simply not much variety in tactical pursuit or challenges encountered. The game is repetitive almost immediately and its few dramatic moments are caused by simple dice rolls that become monotonous in a hurry. The die resolution also feels like it has a substantial impact on the outcome of the game, as you don’t really have enough breathing room to waste opportunities. A flub here and a whiff there and the walls begin to fall apart.

For the most part you’re shuffling a character or two between a small number of spaces and attacking an enemy card by rolling a die. You need to beat a certain threshold, and that’s about it. Other times you’ll be swapping out those rune tokens and then patiently waiting for enough enemies to perish so you can check your result. It’s all very workmanlike and devoid of any magic.

Monsters! Sadly, the only differentiator is that target number in the middle.

The real problem is that all of the effort put into personality is hollow. This is a game that desperately needs something, anything really, to hang your hat on. The lack of simulative elements or narrative drama is simply unbecoming, and the entire experience fades from memory before the box has returned to the shelf. There’s no twist or noticeable achievement. It’s just another game, one to claim space and gather dust like a boss.

There’s a sense that some of this may be alleviated with content that was locked away as Kickstarter exclusive by the original overseas publisher. Grey Fox Games has now published this in North America, sans those deluxe sides. Unfortunately it’s hard to say whether those additional modules would rectify my misgivings as this is purely speculative.

At this point it’s too late anywho.

There is a possibly redeeming quality in that Rising 5 holds up as a gateway game. It has a straightforward system, not too many options tripping you up, and a bit of chrome to lick your eyeballs. The problem is that there are plenty of classics fulfilling this role already such as King of Tokyo, Ticket to Ride, and Carcassonne. This is no classic.

In its current state Rising 5 will hold up for a play or two at a low participant count. Beyond that it’s merely eating up time that’s best spent on something more exciting. It’s trying desperately to be Guardians of the Galaxy, but it’s not nearly as humorous, clever, or engaging. Instead, it’s some cosplayers in a YouTube video and your mouse is hovering over the next button.