Imagine me sitting here, looking you dead in the eyes, and then doing that weird Italian chef kiss thing. That could stand-in for this review. Finito.

But reviews, at least the good ones, have words (take that popular video reviewers). This one will have very many words. Tiefe Taschen deserves them all.

A game is an artistically crafted experience. The designer builds systems to provide incentives and guide the players along a journey. The mechanisms function as boundaries and facilitators, oftentimes supplemented by interaction and social maneuvering.

This German card game sets up a nuanced experience with dead simple mechanisms. It places one player in the hot seat of President and gives them a wad of cash distributed unevenly across cards. This big wig then assigns the bills to any number of players at the table. Money is not just a measure of victory points in the real world but also in this fictional cardboard one.

The boss can split the purse with a little going here and there as each player receives a small handout. Most likely they’ll reward a couple of loyalists and keep the spread isolated to select individuals expecting quid pro quo.

This is when people get angry.

Once the money has been assigned and the President is satisfied, we all choose an action card from our symmetrical hands. All the while Jim is still berating Tom for giving him the big goose egg. It’s all lovely in a gladiatorial sort of way. 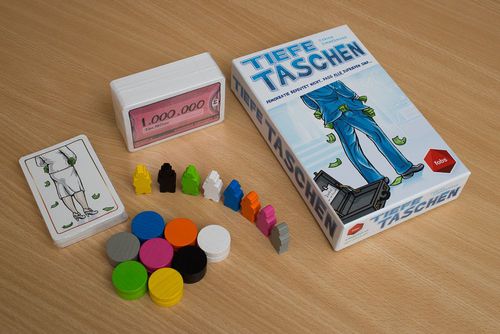 Cards are then revealed and the currency as divided is kept, or perhaps not. Action cards allow for the money grubbers to vote yay or nay on the equity division, in addition to skimming some dough off the top of the deck and blackmailing other individuals.

The reveal of the cards themselves is as dramatic as a Daniel Day Lewis performance. The Pres starts first, flipping their action faceup and resolving it, then the next player clockwise and so on. There’s a great deal of tension as you wait for mouthed promises to be executed. Often people lie and life gets messy.

The deal is rejected if the table receives more “no” votes than positive ones. The challenge is that by playing your card that affirms or rejects the split you are giving up the opportunity to work the crooked end of the spectrum.

In order to blackmail someone you need to give them a little thug meeple in the action phase and then pick the blackmail card. If properly executed, you steal one of the player’s bills. The juiciest bit is that they can counter the aggression with an appropriate action and instead turn the tables, stealing from your pool of currency.

Balls to the wall.

Skimming is another way to squeeze extra sauce. If you play this action then you draw from the top of the money deck and tuck it away neatly in your hidden cash reserves. The hitch is that this only works if you’re the first player to execute the action. Thus, it’s primarily enacted by the President, however, you occasionally see rounds where a later player will pull off an unsuspecting skim as the table “oohs” and “aahs”.

The absolute splendor of this design arrives in how all of these mechanisms intertwine. You have players leaning into the systems to both cajole and bludgeon each other with threats. Half the table will toss around their thug meeples but only a small portion will actually play the blackmail card.

It’s all about incentives and double-think, those splendid moments where you burn hellfire into your foe’s bloodshot eyes and mentally will them off the cliff. Don’t want the President to skim? Everyone can toss their thug on the poor gubanatorial bastard and cause them to rethink their strategy. Don’t like the spread of money? Organize a coup like the good old days. Perhaps even bribe a player with some of your personal cash to row against the flow.

There’s a limited assortment of levers to push but they offer a wide range of creativity. The social dynamic bolsters depth and allows a thrilling sense of freedom. The design offers several jagged tools to back up your vocal chicanery and it’s up to the players to deftly wield them.

Due to this social framework the game occurs entirely above the table. It’s not heads-down play or noodling with layered mechanisms. It’s dramatic mutinies and silver tongued poetry. It’s topsy-turvy and completely unpredictable.

Despite that player-borne chaos there is a subtle well of strategy beneath the surface. The mathematics in the background rely on the observation of delta and working the odds to push yourself just ahead of the rest. You must needle your way into the proceedings and attempt to gain a measure of control in order to achieve victory.

Interestingly enough it’s not about being the loudest at the table. You simply need to be the cleverest.

Let’s take a look at a recent bloodbath. I split the table in two, spreading high amounts of cash to one group and ignoring the rest. As a selfless Presidento, I gave myself just a little bit of dough to keep the cabinet running and the banks solvent. Those players receiving more than me approved the deal and the rest bickered, not able to unify and strike down my accord. Meanwhile I skimmed as Presidents do and inflated my take with a bit of stealth.

Then I bounced to the second group on the next round, offering some sweet skrilla to those players who received zilch previously. I repeated my own tactics, taking very little but relying on the skim milk to come close to even-Steven with the others.

By alternating between the two groups I made sure to outpace the collective and keep myself well ahead of the masses. It worked of course and I made off into the night like Rich Uncle Pennybags.

This approach can easily be negated if the table sees past the shenanigans and performs the simple calculations. To the design’s credit, there’s a great deal going on and lots of verbal sparring and distraction.

It’s a bit like a family reunion of cutthroats and swindlers.

If the collective manages to band together and vote down a particular split, things get mighty interesting. The former President is ousted and must sit idly by watching while the remaining participants attempt to do it all again. A new President is established and the take is parcelled between fewer individuals.

What’s fascinating is that this can happen again and again. The group can continualy whittle down until perhaps only two participants remain. The power dynamic and incentives shift in intersting directions with each reduction to fewer mouths.

This also happens to be the only moment in the game where downtime occurs. It’s exagerrated at larger player counts as an ousted group of Presidents could remain outside the circle of play for several minutes. That price is absolutely worth paying because it provides for such an interesting structure in the decision process.

That particular element also adds to the tension of maintaining favor when running the show. The design really hinges on this duality of uneven power while trying to maintain a body of constintuents. Strategic play as the President is cut from an entirely different cloth than your maneuvering as part of the body politic. Transitioning between these two positions erratically over the course of the game adds a level of unpredictability and engagement that is enthralling.

One of the primary qualities of this design is its mastery of its subject matter. This doesn’t occur from a simulative perspective, but instead from a behavioral one. With little buy-in players are jumping at each other’s throats and executing backroom deals. Just as you turn your head, sweet little Jimmy from down the street is emptying your retirement fund and shoving the knife into your eye. Seemingly compassionate human beings are debased to their lowest forms due to a clever structure that demands deceit. The horror is glorious.

Tiefe Taschen gets played. It hit my table dozens of times over the past year. As a 30 minute card-based version of the classic Junta, it fires on all cylinders.

While this is currently only available as a difficult to find import, there is a North American release coming courtesy of publisher Arcane Wonders. It looks to be sporting a different artistic coat (anthropomorphic animals – seriously?), and there are hints that some of the mechanisms could be softened for more widespread appeal. The jury is still out on the execution of this new version, but it’s something to keep an eye on as 2018 plays out.

Tiefe Taschen in its current state is one of my favorite designs. This is not because of its cynical commentary on the human condition, but because it’s the best small box negotiation game ever to be printed on cardboard.

Grab a wad and make it rain.

← Dinosaur Witches and Sand Worms – A Grimslingers Review
The Reveille →