“That it’s, I’m melting your people’s faces off.”

I reach for the little facsimile of Fat Boy, nestled in a cluster of seemingly harmless wooden shapes. Then I grab a green cube from the pile. Aaron always plays with green.

Except this isn’t just a cube – it’s really a missile.

“See this little Spongebob-shaped square? It’s going to snuff out your rodeo clown dictatorship and no one’s going to miss you.”

I hold the missile up in Aaron’s face to reinforce my insanity. He sees the ashen cube and the nuke sitting upon it, its name death.

He knows the totality of his mistake in crossing me. 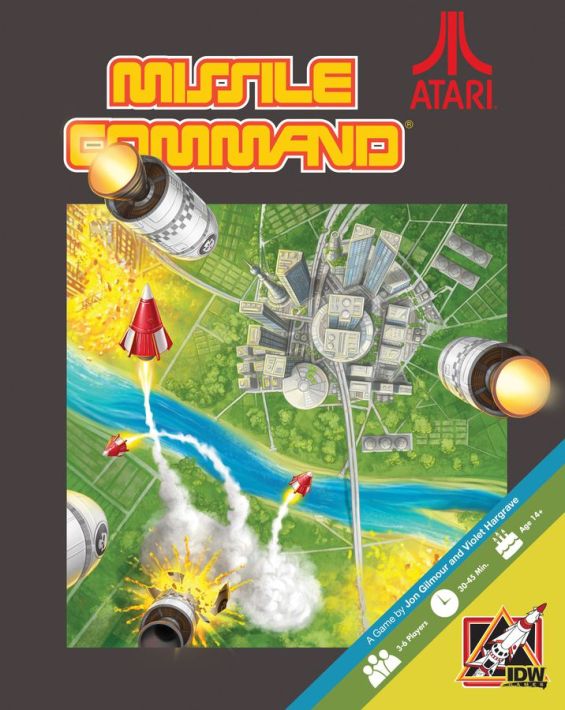 Missile Command is one of these neoteric tabletop games based on an archaic electronic one. It’s part of the IDW Atari series, riding shotgun alongside Centipede.

Missile Command also demonstrates that an analog interpretation of a digital past-time is best not tackled as a simulation. That’s to say – this isn’t really the Missile Command of yesterday. It’s an engaging 30 minute negotiation where you get to blow the hell out of each other’s nations all in the name of the holy ghost of nostalgia.

You can see tethers reaching out towards the major influence of Cosmic Encounter. There’s betrayal, special abilities, and a general sense of the unhinged. At its best everything is wily and chaotic and the drama is interspersed with a dollop of laughter. During those moments of world-wide destruction the sun seems brighter and beer seems colder. 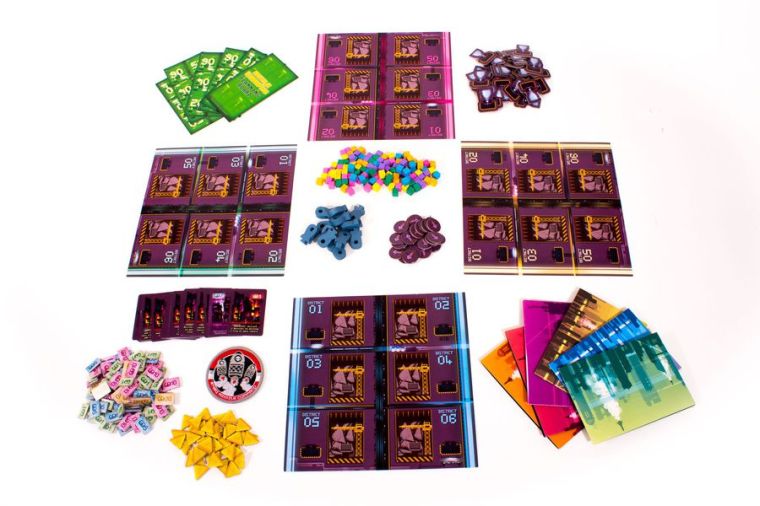 One of the joys of the Missile Command tabletop experience is that much of the game is simultaneous. This keeps the pace lively and allows for everyone to be dialed-in and focused. There’s a great back and forth of harassment and trash talking during the negotiation round. Players exchange currency for missiles, nukes, and defensive interceptors all in the open. It bears significance because missiles are color-coded to specific players and can only be fired their way.

This is absolutely wonderful.

It allows for strong-arming and brinksmanship. It provides teeth to follow through on threats. When you commit the entirety of your economy to ordnance directed at that one player who’s been needling you the entire time – it feels grand. Sometimes you just have to torch a blockhead to make a point.

Then we all huddle behind our screens and READY ZE MISS-ILES! 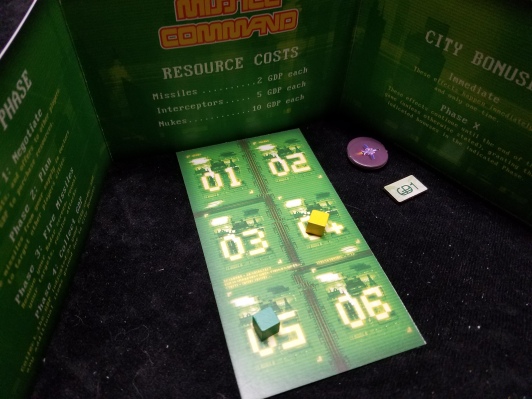 We place those purchased bomb diggities on different vectors corresponding to other player’s precious cities. You’re judge, jury, and executioner and that little cardboard hovel is going up in smoke.

These silent moments can be tense and weighty as you simultaneously plot carnage while bracing for abuse.

Then we lift our screens and press that big ‘ol red button. This is where things gets messy, nearly unbearably so.

And these are the moments where the 38 year old cabinet begins to show a little wear and rot.

Without order chaos ensues. The resolution of everyone’s missile strikes is simultaneous and the game offers no direction for how to smoothly resolve this. People start calling out their shots and others scramble to flip their city cards – denoting absolute destruction.

You’ll search for a solution, perhaps having a single player resolve all of their attacks first or having everyone call out their strikes along the first vector. It never feels as smooth as the rest of the game and metaphorically mocks the lack of clarity riding behind violence.

But you will eventually get past that and then you’ll move on to the next round and do it all again. The game screeches along at a very solid pace of dissent and barroom brawl mixed with that messy shockwave of explosions. The war comes to a close in a brisk 30 minutes with half of the world destroyed and a group of grim bastards sitting around the table all smiles.

A table full of rocket men.

This is a game that desperately wants the group to negotiate, toss insults, and push each other in interesting directions. There’s not a lot of direct incentives woven into the mechanisms, and much of it is left up to the group to best sort it out. This works for the most part due to the clever color-coded missiles, but it also breeds an experience that hinges on the participants.

One group can sit down and buy right in, hurling death and destruction into the alleyways of their peers. Another can approach the game with a calm demeanor and quietly go about their business, likely in search of Missile Command’s magic. It’s fragile in that regard and less reliable than its primary tabletop influence.

Furthermore, beyond the social positioning the game can feel a bit capricious in its randomness. When the game concludes and a winner is declared, you won’t have a clear picture of what they strategically executed to achieve victory. Fire and pray seems to be the order of the day.

Yet that never derails the energetic joy of trashing each other on a global scale as hurled insults are paired with glorious explosions.

Missile Command is not a political game, but there is perhaps an unintended subtext of satire that’s worth digging into. There’s a general sense of marginalization concerning the people and victims in how they’re abstracted away. Humorously, in some respects you celebrate death as losing a city may harm your score, but it offers a new special ability with a sleek catchup mechanism. This takes the sting out of being targeted but it also takes the sting out of mass destruction.

The whole exercise of literally spending your country’s GDP on implements of war is amusing from that angle of caricature. While you may invest heavily on interceptors to shoot down incoming missiles, the game heavily rewards offense dovetailing with that morbid parody.

It’s hard to say whether this is all a happy accident or a sly wink. I can say with certainty that Missile Command is a solid amount of free-wheeling fun which comes close to scratching that Cosmic Encounter itch in a shorter and more reliable timeframe. It may never butt up against the quality of that classic design, but this isn’t so much an indictment as an appeal to realistic expectations.

Missile Command is a game that’s not quite smooth and is perhaps more unpredictable than some would stomach. Its joy supports and relies on an energetic group, one capable of bouncing between sweaty high-fives and insulting each other’s female parental units. That may not be your group, but it’s certainly mine.

← Fort Sumter: The Secession Crisis, 1860-1861 – A Review From the Mason-Dixon Line
The Curious Case of Curio: The Lost Temple →