It’s the third day of Gen Con. This means I’m half-dead, my brain numb from extended wars in the Imperium and ancient Japan, my consciousness slightly adrift as I struggle to remember the resulting peace from a full night’s sleep.

But it’s the third day of Gen Con – sleep is for the buzzards circling overhead.

So I pull out Nyctophobia. 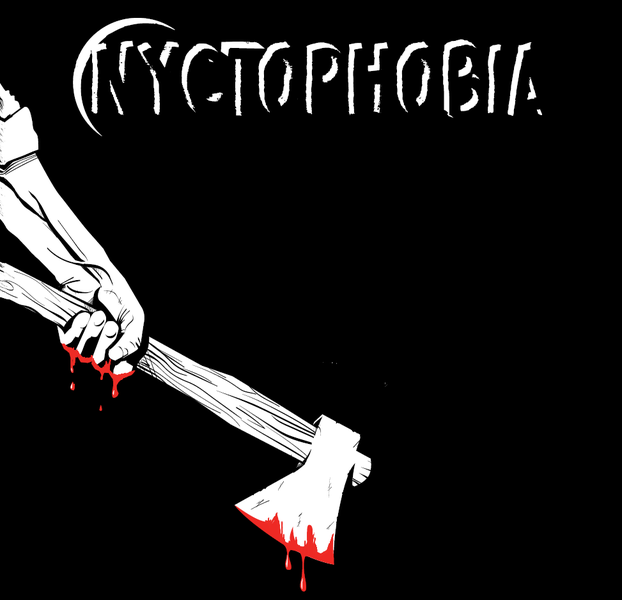 Marcus, my wild-bearded friend who looks one degree separated from an axe murderer, claims the role of axe murderer. He read the rules earlier during some down-time, cackling with glee upon verbiage that’s still unbeknownst to the rest of us. I’m already uncomfortable as the role of teacher is usually my own.

The board starts out a surfaceless void. It’s full of these concave spaces, yearning for plastic and blood. Our blood most likely because Marcus is the one with the axe and the one the game calls murderer. 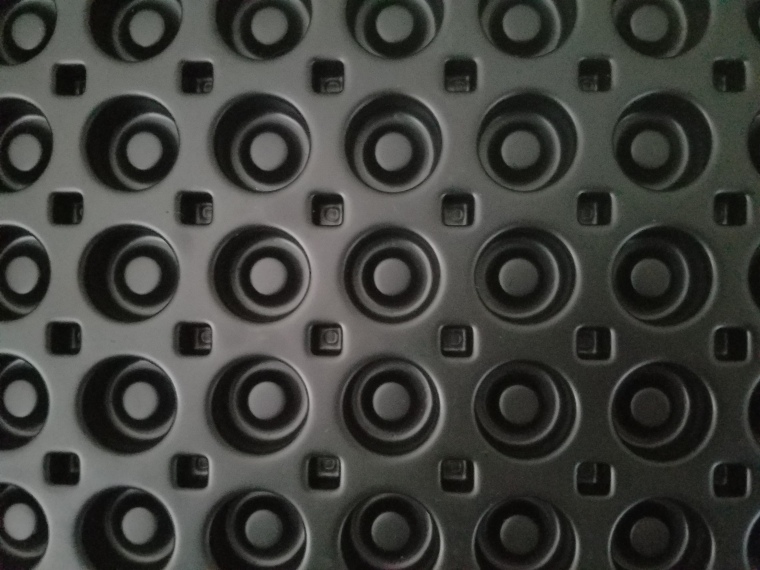 I stared into the eyes of the abyss, and they stared back.

Then we put on the blackout glasses. Everything changes.

It’s disorienting enough to fumble around in darkness, but it’s even worse when you’re wearing dark shades that block out only a majority of the view. The hot lights seemingly miles above create an eerie reflection in the lenses. I can see my own face. It’s like I’m watching myself in the Blair Witch Project, oddly outside my own body. So I close my eyes.

Marcus says he’s setting up the board. I don’t trust him because I’m uncomfortable and out of place. Also, he’s an axe murderer.

It feels as though he’s left us, vulnerable and afraid, as immediate silence intertwines with the seemingly distant cacophony of the hall. Time seems to stretch out.

Devoid of sight, my brain starts to do funny things. Without meaningful visual feedback to process, my being begins to wander. It feels like an eternity before the board is assembled and we’re ready to go.

Now we’re in the forest, being hunted.

Chris takes the first turn. He describes the positioning of his piece with a sharp plastic tree-line to the north and openings along every other vector. He moves a couple of spaces and again describes what he feels. I focus and try to assemble an image in my head, storing it for later as it’s now my turn.

The hunter takes my hand, violently, which causes me to flinch ever so slightly. He places it upon my piece.

I run my finger along the grooves in the top of the pawn, notches cut in the shape of a cross. I slowly slide my finger down the figure and into the neighboring spaces – careful not to extend too far and cheat. Occasionally I’ll bump a tree I shouldn’t at the corner of a concavity but I do my best to remain in the spirit of the nightmare. This is not hard.

While moving we’re constantly talking. We’re building our own little mental depiction of the board as we’re separated. One of us must find the car – another weirdly shaped double-space piece that’s alien to the touch. This is our goal. While we wander aimlessly bumping into trees and scraping along the edge of the board, the hunter stalks forth.

It’s the second turn and a picture is starting to develop. I feel like I’ve mapped out my little slice of this fever dream, a nook incredibly small on a board that’s grown infinitely large in my mind. Time and space continue to pull apart and my reality is no longer my reality.

What the hell is this game?

Then Chris is caught.

The axe murderer squeals in a humorous yet supremely unsettling way. Chris loses one of his two health tokens but counter-attacks the maniac with his rock. Yes, we’re armed with a rock which is a thing in the game. This knocks the lumberjack back, giving Chris just enough space to breath. If he’s found again we lose.

More terrified than selfish, I push farther into the forest. I then flip my pawn over, burying its cross-like head into the bowels of the earth. I’m hidden which means the murderer can’t murder me.

Lenny takes his turn, working his way straight south from what we’ve determined is the north west edge of the forest. He’s continually communicating verbally, letting us know what his fingertips collide with so we can expand our imagined maps.

I make a comment trying to formulate a strategy for next turn. Shit.

I’m no longer hidden. When you talk your piece is flipped upright and the noise token is placed in the space. The axe murderer is coming for me. The edge of my seat is on fire.

Marcus takes his turn. Again, seconds stretch into minutes as my brain is dancing.

“I’m closest to you, Charlie.”

Then it’s our turn. Chris pushes further north east without incident and hides. He’s smarter than me and doesn’t talk.

I run full speed taking a sprint action and push east. Even so I feel like I’ve covered barely any ground in this godforsaken place.

Then Lenny takes his turn, continuing south. As he describes his little slice of hell I sit there concentrating. My eyes are tightly shut and I’m trying to determine how close he is to my position. Then something magical and terrifying happens.

As a beard barely grazes my left earlobe, an intense growl emerges. I instinctively leap to my right, falling into Chris and nearly landing upon the floor. The axe murderer cackles.

What the hell is this game?

It’s two turns later and we’re close. Chris has remained hidden and out of danger. We have no idea where the maniac is. I’ve hit a dead end and hide once again. I don’t talk this time.

Then Lenny discovers the car. He shouts with enthusiasm. I fist pump and yell. Shit.

But Marcus wasn’t paying attention. He remains quiet. We’re stumbling through Gehenna but he’s sitting in a busy convention hall. He didn’t hear me.

But we found the car. Our hallucination would end soon.

“Chris, I’m four spaces away from you.” Marcus sneers.

If he finds Chris we lose. We call for help this turn and just need to survive the axe murderer’s last charge. So I throw my rock.

I remember the long corridor stretching west-ward from my position. My rock flies down the passage and hits a tree-line, creating noise; noise which the hunter must move towards.

Marcus groans. It’s over. I let out a gasp as I can’t remember the last time I took a breath.

I want to play it again, but tomorrow, not now. My body is shaken and my mind ravaged. We feel changed. Not now, but tomorrow.

← The Curious Case of Curio: The Lost Temple
Like a Rolling Asteroid – An Empires of the Void II Review →

10 comments for “Nyctophobia – A Narrative of the Dark”