No Thanks! is the one true filler. Fully explained in a single breath, new players instantly get it. Yet it’s full of wonderful depth, trash talking, and scattered dramatic moments where you’ve pushed your luck and fate has pushed back. It’s nothing short of magnificent.

Thorsten Gimmler was a man, but more importantly he was a Viking* ripped from his time and place, transported to 2004 so that he could fulfill one purpose. With a belly full of mead and a fistful of cards, this Norseman delivered. He said “nei tusen takk” and confirmed the assertion by pounding a small round stone upon the goat-skin playing card.

The endeavor is simple. A card is revealed with a value between 3 and 35. The current player must either take the card, or place one chip on it. This is a game where you do not want points. When a high number such as 31 comes up, we go round and round and the chips begin to form a little mass grave of concession. If you take the card you get the chips, so there’s a constant sense of “should I?”

There’s a substantial wrinkle in that if you can acquire a card with the digits one below a card you already possess, you then ignore that higher number in scoring. So if you have the 15 it can be completely cancelled out if you acquire the 14. Later maybe the 16 comes out and it’s free for you to take, so you proceed to milk the rest of the table. Wait too long though and someone else will grab it, maybe even they will be forced to by running out of tokens. Or, rather, they’re simply operating in the game’s creative space for malice, snatching a card that would save the entire game for you and taking some points, simply to crack you in the jaw and leave you sobbing.

This experience earns the adjective wonderful because it centralizes key emotions with balletic peril. You expend limited resources to pass on taking negative points, constantly evaluating the cost with a glimmer of hope that your appraisals are more precise than the next person’s.

As your chips dwindle and you sit without burden, you run the risk of overextending.

Don’t run out of chips.

I tell myself this every time and lo and behold, you know the rest. Devoured by a little game of 33 cards designed by a madman.

The great conundrum with this style of design is its role. Filler. That term carries a bit of a full suitcase around with it for hobby gamers. It’s become synonymous with “throwaway”.

We play short 10-30 minute titles often to fill a gap in time between bigger offerings. They’re the pretzels you devour between steaks.

The vast majority of these types of things are mediocre. The problem is that it’s very easy to design a simple and light game that takes a few moments to play. Hobbyists often place such a large emphasis on quantity and banging out plays to hit a certain threshold, that we often feel the need to fill those 10 minute moments with something, anything other than standard human interactions such as conversation or arm-wrestling. So if anything is desired then anything will do.

But it doesn’t have to be this way.

The obstacle is that it’s quite difficult to design a pretzel that’s so damn good you forget about the sirloin. Thorsten, my man, carves it up like a villain.

Part of what’s inspirited this collection of words is how often we’ve been playing this lately. It’s a game I’ve rediscovered several times over the years and one that repeatedly begs the question: “Why don’t we play this more?” So play this more I have.

The newest version from publisher AMIGO also happens to be the best. The old Z-Man edition is certainly functional and compact, but it looks very dated as if Marty McFly tumbled out of the Delorian and emptied his pockets. 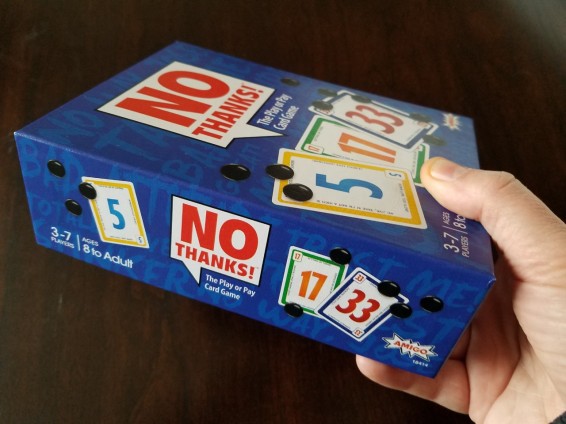 The AMIGO release suffers slightly for less portability, but it counters that with an excellent form factor directed at play. The cards are oversized and quite large, even bearing little funny quips along their edges. The tokens are large fantastic bits that you can’t help but roll around in your hand between plays. Best of all, the MSRP of this game is still absurdly low for the experience provided. At $9.99, it’s cheaper than a meal at Chick-Fil-A and it will keep you energized and fueled long after that, admittedly delicious, chicken is outside of your body cavity.

No Thanks! is the best filler ever designed. It’s thoughtful, clean, and allows you to step right in and start wincing as you cough up a token and pass. It defies its classification and is the type of of design that can unexpectedly take over the rest of your game night.

*Thorsten Gimmler is in fact German. However, it is widely known that he is a reincarnated Ostman, hence his lord given name and intense demeanor. Odin is not without humor.

← A Holding On: The Troubled Life of Billy Kerr Review
Turning Tricks Like a Villain- A Pirate Tricks Review →

3 comments for “The Best of its Ilk – A No Thanks! Review”