There’s this moment where you’re sitting there, waiting to play. The room is full of silence and everyone is staring at a grid of cards. This is it, party gaming in the future. Codenames is a clever bastard.

While it may be clever and popular just like Brandon Hughes in 7th grade, just like Brandon Codenames is a bore. Every single play is full of an awkward feeling out period where the clue givers retreat into the grey folds of their brain and the fun ceases to exist. It’s a game of waiting, punctuated by moments of intense cleverness that don’t quite justify the expense.

The best metaphor to succinctly describe CGE’s mammoth word game is humorously internal. The experience is comparable to attempting pronunciation of designer Vlaada Chvátil’s name. You will bumble about at first, tentative and unwilling to commit. Eventually you will get it and confidently toss it into everyday use.

“Oh you like Kingdomino? You should try Space Alert, it’s designed by Vlaada Chvátil.”

Then some time will go by and you won’t remember how to pronounce it. Just as you will need to re-learn Chvatil’s name, you will need to re-assess the board and slip into that sound of silence. The depressing cycle starts anew and we’re all worse for it. 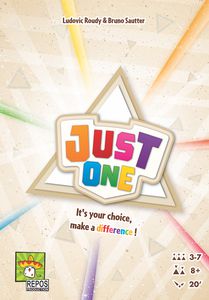 This not-quite-new release from Repos resides in this very sweet spot. It’s a casual and light thing you can pull out with Grandma Marge who was born before automobiles were in everyday use, or you can table it with Dave who regularly plays Vital Lacerda games and thinks you are mentally inferior. Everyone wins because the game is rad.

It’s dead simple. One player takes a card from the deck and places it on a little plastic stand in front of them. The trick is that they can’t read the card but everyone else can. They select a random word from the five on display by shouting out a number. If it’s a funny word or perhaps related to a shared story, everyone laughs.

Those who can read the selected word write down yet another word (yeah, word games have lots of words). The idea is to offer a clue so the blind person can guess the hidden option they’ve selected.

So if the focus was J.R.R. Tolkien, you might write “Hobbit” or “Middle Earth”, or whatever you fancy.

Here’s the rub: once everyone has written a word they then compare their results privately. If any duplicates exist, all of the duplicates are tossed out. Only then does the guesser get to see all of the clues.

The game is not simply the group trying to clue in a single player, but rather it’s a bit of a tangled maze where you have to get into the heads of everyone involved. Instead of the majority sitting quietly and waiting for the fireworks to start, they’re engaged in linguistic analysis and given legitimate agency.

A better clue than “Frodo” would actually be “Author”. Alone, this is meaningless and wouldn’t help at all. But you’re not alone; you’re offering a hint alongside a row of hints. It’s easy to get near the chosen word, but the cleverest of plays is the clue that connects the final dot.

It’s simple, yes, which means you can play with old horse ‘n buggy Marge. But there’s ample room here to navigate and it can make you feel extraordinarily clever.

There is some fragility in that output greatly depends on the input. A group with a weak vocabulary will struggle. For some, this game may be downright hilarious as they infuse naughty terms and push the envelope. Others may find it rote and lacking personality. Just One can’t help if you play with a bunch of dullards.

That malleability though is equally beneficial as it is hindering. It allows you to take the game in various directions and morph to fit various styles of comedy. This allowance fuels the creativity and challenges you to succeed by your own measure of success.

Speaking of, this is one of the only games I’ve found that truly doesn’t care about points. I’ve played more than my share of Pictionary and trivia games without keeping score. They always feel crippled to some degree when competition vanishes. But Just One is cooperative, and more precisely, focused on the single round rather than an extended cumulative measure of achievement. So don’t keep score.

In my experience this release is universally appealing. All it takes is one or two sharp knives for the thing to come alive. The one true flub is the lack of words in a word game. This is an easy one to rattle off round after round and play after play and too early you will hit repeats which blunts the caper. A thicker deck would have been appreciated.

Still, this is a cheap title and one which will likely pop off some new SKUs like a wet Gremlin. Its acclaim is legion and here I am giving it another push.