Power Rangers: Heroes of the Grid is all kinds of interesting. Beyond the immediate jolt of huge 50mm+ miniatures and yet another IP we’re supposed to love, there’s the big draw of Jonathan Ying. This dude brought us the more recent DOOM board game from FFG, a high velocity dungeon crawler that couldn’t find an audience. While I’m a child of the 80s and thus a fan of the Mighty Morphin Power Rangers, it’s really that last point that digs the hooks into my skin.

But yeah, this thing is big. Those minis are larger in scale than any other release I’ve seen. They’re solid sculpts and retain detail despite being a soft plastic that you can toss around without consequence. The illustrations and graphic design are also excellent and complement the chunky cardboard. Renegade Games has done a crackin job in presenting a unified vision to tickle your nostalgia receptors like a flood of color injected straight to the brain.

Note – Megazord is a cardboard token in the base game, the miniature is found in an expansion

That physical acuity matches the experience. This is a very pleasing game with its lasers aimed just above family weight. It reliably comes in at a very lean 60 minute playtime and offers enough tactical decision-space to finagle investment from the indifferent.

One of the most radical elements of the original Power Rangers television show was how they re-used all of the action clips from the earlier Japanese version of the series. The American actors appeared only in scenes where they were helmet-less, producing this odd juxtaposition of two separate halves. The cobbled together nature of the show wasn’t jarring, but it occasionally was apparent and slightly awkward. 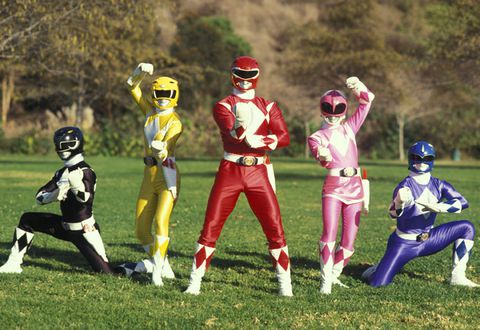 Power Rangers: Heroes of the Grid embodies this approach. It offers a lean experience that’s split between two modes of play, one far more interesting than the other.

The initial fraction is one we’re familiar with. It’s the Pandemic style whack-a-mole cooperative design where you bounce between locations and throw water upon fire. Strategic decisions must be made with limited action points as a misstep here and a lapse there will lead to the fire spreading to inferno.

The blaze here is a mass of faceless putty warriors clogging the streets of Angel Grove. The tight board features only four spaces and these areas congest quicker than the I-405 in Orange County. You flip five spawn cards each turn which yield various amounts of standard putty thugs and the more deadly super version. If each location maxes out its occupancy, then you immediately lose.

So you start triage from the get-go. The Pink Ranger heads to the high school to unleash hell, while the Red travels to the Industrial Complex to lead a counter-assault. You will need to coordinate as you can thread actions and there is no strict rotating turn order.

This works rather well, although the environment is somewhat bland and limited in scope. There is an effort to spice things up by offering advanced sides of the location boards, but those effects such as reducing hand size or boosting draw offer limited variance. 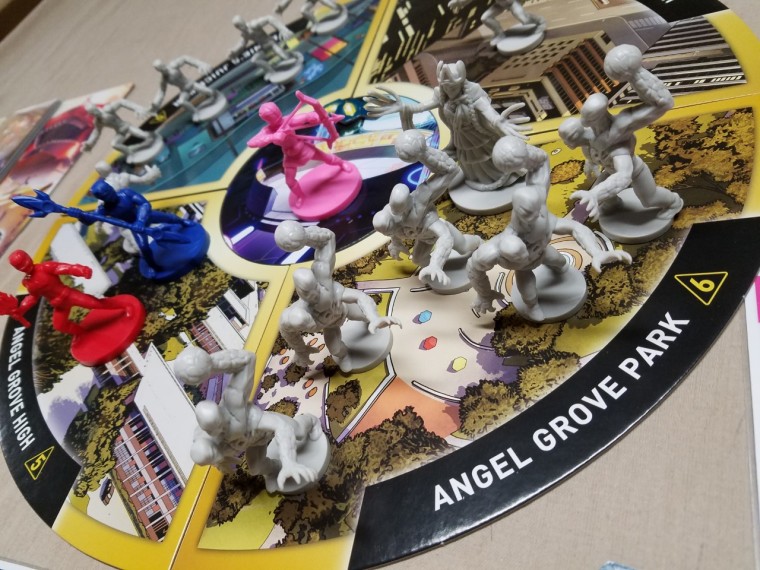 Strategic considerations are tussled a bit when a monster mini-boss is spat from the spawn deck. These hefty combatants, such as a giant pig head with teeny legs and meaty arms coming out of its maw, provide greater challenge.

The battle system is where the special sauce resides. Rangers may initiate conflict which includes every figure in their area. There’s a nice teamwork element as players coordinate movement into a zone followed by one of them kicking off the attack and all joining in.

This is when the camera zooms, swapping between that footage filmed in LA with that in Tokyo.

Enemies are represented by asymmetrical combat decks. You deal out a matching card per enemy figure which represents an individual foe to attack, as well as the unique effect they will hit you with.

Rangers then go to work.

They alternate playing one of their own cards and typically roll dice to inflict hits. Damage is placed straight on antagonist cards where you hope to meet a threshold and flip it over. Then the foe’s take a turn and trigger the next card in their row. This presents a programmed series of attacks that occur between Ranger actions, allowing you to collude and construct a battle plan together.

There’s quite a bit of discussion on who should take the opportunity to attack, if anyone can eliminate that next card before it triggers, and who has a special ability that hasn’t been used yet. If you can destroy a card you remove a figure from the area and the enemy turn will be skipped when it comes time to activate that particular card.

So there’s a surprising amount of nuance. Maybe you want to knock off that passive ability the hog-man threw down, but you’re about to get hit with a massive four damage attack. Which one do you go for?

Additional effects can throw a wrench in the works, such as cards guarding others that are positioned adjacent. Some enemy effects are fast allowing the baddies to take a turn before the Rangers. This variance offers a very nice degree of meaty assessment in a relatively straightforward system.

Much emphasis is also placed on deck management. It sort of inverts the concept found in Gears of War: The Board Game by utilizing your draw pile as your health. You’re able to pull more cards into your hand when a battle starts, but damage is dealt straight to your deck so you need to weigh this decision carefully. Resting and visiting the centralized command center allow you to refresh. Managing this loop of draw deck to hand to discard pile back to deck again provides an interesting conundrum.

All of this is pretty slick and compelling, for those engaged in combat. A minor problem with this system is that it leads to spectation. If Liz and Kyle are throwing down at the park, Jim and Lila are sitting off to the side, waiting patiently for their next turn to act. While fighting is streamlined, it can be a bit heady and lead to back and forth discussion. In a congested space five or more minutes for a bout is the norm, blunting the edge of play for those on the sidelines.

The majority of Heroes of the Grid is combat. Since this is the heart of the experience it can feel often as if this is really a battling card game against an AI opponent where you utilize asymmetric player decks to combo and riff off each other.

By the way, that asymmetry is pretty gnarly. Each Ranger is distinct, such as the blue possessing a bevy of counter attacks and the pink offering massive damage. There’s a definite personality baked into the card selection that you will explore and relish.

Similarly, each monster has their own deck with a different profile. You only use two of these four included mini-bosses each play, and likely only a subset of the Rangers if you have less than five players. This results in a combinatorial quality that mimics the exemplary Street Masters.

This is where we round the corner and things get interesting.

The biggest challenge I have with Power Rangers is that it’s streamlined Street Masters. Conceptually this is fine, but the cost in depth and discovery is severe. At face value this is an overly reductive comparison, but they both compete in a such similar niche that obsolescence must be addressed.

This takes that modular design philosophy and cuts 30-60 minutes off the playtime. Both have you holding on for dear life, riding wave after wave of mindless goons before eventually taking down the boss to claim victory. However, the big catch here is that this is not nearly as rich of an experience as its predecessor.

Street Masters offers much deeper play as each character possesses wholly unique mechanisms, multiple ways to combine and tease out various effects, and simply a greater space to explore. After a single play of Heroes of the Grid you will feel as though you’ve experienced the majority of what your 10 card deck has to offer. Strategically you will be able to discover new tricks and find new combos, but these moments of sweetness will slowly be spaced out farther and farther. 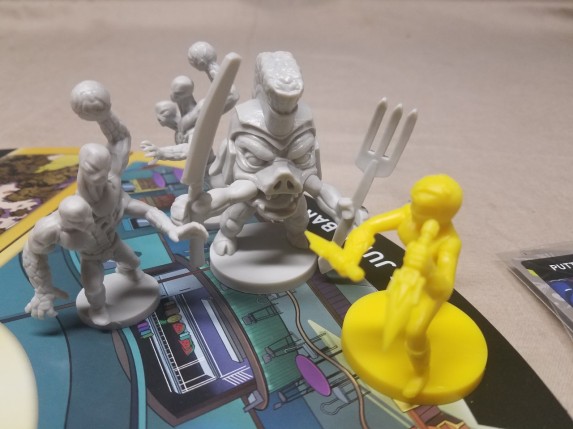 Street Masters on the other hand offers protagonists which will stand up to dozens of plays before exiting the stage. They each possess a wider range of tools which reveal nuanced and clever interactions, further propelled by the variety in opponents and maps.

Similarly, the base enemies and environments are limited in this release. Locations in particular are flat compared to Street Masters’s dynamic environments. That staid whack-a-mole system replaces a more meaty tactical situation at the cost of fluidity.

Unfortunately, the variety in the core box is also leaner in Power Rangers. The two basic enemy types and four standard locations are used in every play. This wouldn’t be an issue if the design didn’t hinge on its content exploration. Standard play can feel repetitive relatively quickly and you will need to jump into the large swathe of expansion material early in the life-cycle. This will put off some of the repetition and breathe new life into the game, but that new stuff is immediately on the clock.

Repetition is primarily a result of a rigid narrative structure. By that, I mean this game has you doing the exact same thing, over and over again, play upon play. You hold out blowing up putties and hanging on for dear life until Rita hits the streets and the showdown begins. While the Sadler brothers’ design follows a similar structure, the varied nature of the stages and how this upsets enemy behavior shifts the tempo game to game. In one play, the enemies may be trying to smuggle black market weaponry off the battlefield, in another they’re raiding a casino and stealing fistfuls of poker chips. This injects life and presents a compelling story framework to interact with. Meanwhile, Rita’s always going to be cackling “I’m free! It’s time to conquer Earth!”

These limitations may simply be a cost of its brevity and tightly wound bones. Street Masters is a more complicated and difficult game, one you will struggle to play with a young one. This has wider appeal and may hit the table more frequently, however, the large amount of space and high cost it requires are at odds with the shallower role it occupies.

As we come to a close I find myself conflicted. Power Rangers: Heroes of the Grid is stuck in this odd space. Jonathan Ying’s work does capture its source material rather well. It glosses over more complicated villain machinations, but it draws upon the heart of the series by fostering teamwork and cooperation. The combat system is excellent and the asymmetry is strong, but it struggles to get entirely over the hump due to humdrum repetition, a condition which proves costly when positioned next to competition.

Those who find the Power Ranger brand particularly appealing will be able to forgive the shortcomings and stretch this thing as far as it will go. Sprinkle in a few expansions – which are excellent in their own right – and the longevity will lengthen.