Sometimes I come across a game and I just want to shove it into a cannon and blast it into my body. Yeah, that’s somewhat disturbing, which precisely fits the scene as I’m riffing on Cryptic Explorers, a game that’s black, white, and terrifying. 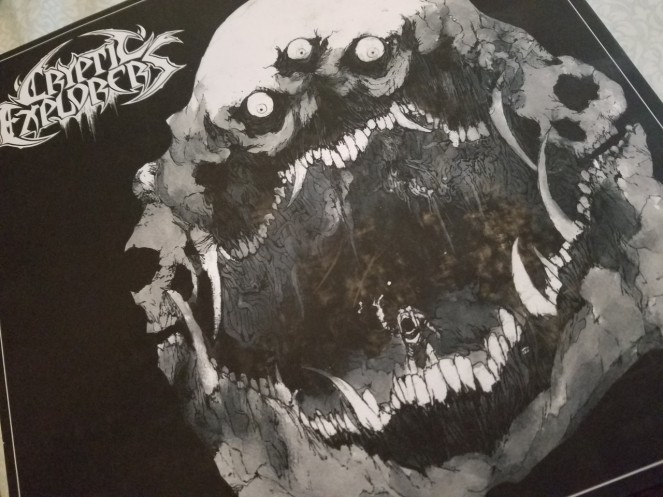 This is another one of those Kickstarter preview things. I don’t plan on making this a regular habit, but some games are damn good and deserving. Cryptic Explorers fits the bill.

That aesthetic is something you either eat up or toss out. I adore the Black Metal facade and this one sits comfortably on the shelf right alongside the now classic Cave Evil. There’s a stark and oppressive atmosphere at work and it fuels the nightmare your explorers will endure.

The setup is a one-vs-many dungeon crawler. You know, the same style originally presented in HeroQuest, perfected in FFG’s original Doom, and carried on through subsequent generations. Here one player takes on the role of a Goddess, a powerful shade of death inhabiting this slice of oblivion. You will wield an asymmetric cohort of demons and churn through your unique deck of abilities, all in the name of burning the protagonists into ash.

The rest of your friends are the Cryptonauts. A mix of scientists, occultists, and muscle intent on entering the plane of the afterlife and lifting its secrets. You don spacesuits one degree separated from power armor, brandishing firearms and sorcery to fell the beasts of the pale.

This is where the game takes its first radical departure. Sure, that pale veneer is certainly something, but I’ve already seen that in Cave Evil and Escape the Dark Castle. The first truly innovative touch is in the Cryptonaut squads.

Each player does not control a single character. Instead, the forces of good are comprised of six total explorers spread across 2-3 squads, depending on player count. With two Cryptonaut players, you each control a squad of three ‘nauts. With three protagonists you each control squads of two.

This matters. The squad structure is not a fluffy designation, it serves to fulfill synergistic play. There are 32 Cryptonaut characters and each contains a set of abilities and powers completely their own. This means your little squad can take many different forms. Some ‘nauts influence your build in direct ways, such as offering bonuses to stats if it’s comprised solely of scientists, or perhaps offering bonus move pushing you towards a swift strike team. The combinations feel endless. Most importantly, the game fulfills this promise of combo-building through its depth of strategy and tactical play.

But it’s never that simple. To fuel those various abilities you will need to progress by harvesting souls. This progress is roughly akin to leveling up in the multitude of RPG-adjacent designs, but it has some of its own flair and clever design.

You will pick up soul tokens scattered about the map, these little amorphous specters of unfulfilled and forgotten souls, and then you may plop them down on the over-sized character sheets to unlock one of your abilities. The strongest of powers requires you actually consume the token for a one time dramatic effect.

This system of growth is exceptional. It pushes you towards the far edges of darkness, battling through walls of fleshy creatures simply to harvest the dead and beef up your scientists-turned-invaders. There’s never quite enough to go around and you will not unlock every single ability, so you must pick and choose how you will progress your squads to tackle the challenges laid before you.

This setup yields an interesting playstyle that’s very engaging. As you move about the cavern you will do so as a small unit of troops. The spawning rules (lifted nearly straight out of the OG Doom) force you to maintain defensive sight lines and a proper formation. It feels with every bone in your body that you’re a well-trained squad operating under tight procedure.

Meanwhile the Goddess sitting across from you is swelling with hate. She slowly amasses her own precious resource, power, which is used to summon creatures around corners and attack your position. There are large and small beasts, each with distinct abilities and personalities. The Goddess also has her own suite of tricks which spring unexpected traps and crippling debuffs.

The atmosphere is dense and the odds feel insurmountable, yet balance is tight and certainly fair. The multiple character format means player elimination isn’t a thing, and those moments of intense sacrifice and heroic deed are scattered about in digestible chunks. This is a dramatic game where you push forward and shove your mini-gun into the gullet of a hellacious deity that’s as thirsty as you read about.

The final piece we need to talk about is the Realm of Death. This is the board you will explore, a static hulk of cardboard with dizzying artwork. At times, it can be difficult to understand the myriad of textures and contours, but you will acclimate quickly enough and begin to understand the otherworldly geometry at work.

Realms of Death are significant not simply in their layout, but in how they provide the means for the Cryptonaut team to attain their Knowledge of Death cards. These are earned through map-based objectives woven into the environment. These consist of tasks such as unearthing all of the scattered sarcophagi littered across the board, or perhaps destroying the ancient alter which triggers an avalanche of pain courtesy of a massive monster spawn.

By utilizing narrative and tying the maps back into the overarching story, play feels like a closed loop that’s truly a pleasure to interact with. Drama is always at the fore of the design utilizing a single die based resolution system that is simple and keeps the process moving. Adding weight is an excellent stamina system which allows you to re-roll dice or gain extra actions during those crucial moments.

I was surprised at how intuitive and relatively straightforward this game was. The moments it chooses to branch out and extend complexity are carefully considered and focused on expanding the experience. This includes the delightful variety reminiscent of Street Masters where you form a singular experience out of multiple modular components (Cryptonauts, Realm of Death, Goddess).

I’ve only managed two plays in my limited time with this game, but I’m absolutely enamored. The only rough spots I’ve encountered are primarily a function of this style of design. There is potential for play to turn into a bit of a grind as the antagonist blows up their well of power to summon a wall of enemies. This can lead to an attritional battle that could overstay its welcome. Combat is fast enough that this doesn’t pose a huge threat, and typically the Cryptonaut squads will be operating on separate sections of the map. This means that one team may find themselves in a meat grinder while the other presses forward with little hindrance.

The dynamic nature of that challenge structure is entirely calibrated by the Goddess player. They are free to strategically deploy their forces and hinder the progress of the explorers. This, in and of itself, is a fascinating experiment of sorts. After playing as the antagonist it will stick around like a phantom in your skull. You will question your decisions and rethink strategy. This is the type of reflective exercise I want to be burdened with.

The lack of a native timer could possibly be a stumble. I can appreciate the open nature of play, but if a group gets particularly bogged down things could drag out in terms of literal playtime. Both of my plays have been just over two hours, but it certainly could have drug on quite a bit longer. Players can rest and recover health and the enemy is gifted a continual trickle of power. As purely a thought experiment, play could last indefinitely. This will not happen of course, but those seeking a very controlled tempo will find that entirely in the hands of those sitting at the table.

And yet that controlled tempo is also one of the most liberating aspects of the design. By vesting the power with the Goddess player, it imparts a sense of control and dominion. It feels as though the others are invading your realm and this is your space to protect and wield like a rusty machete. 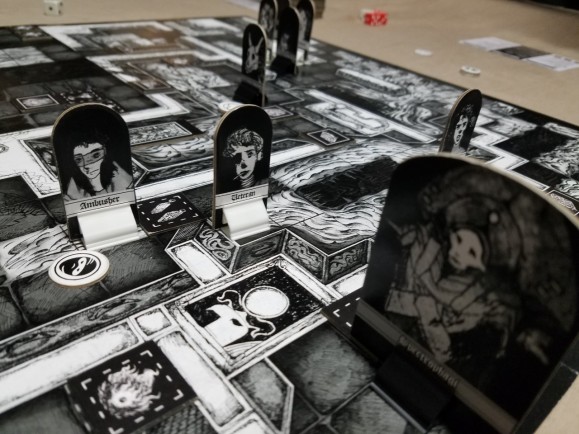 A lack of miniatures may be a turn off for some. I’m a miniatures type of guy, but this black and white visual style is the single format where I actually prefer standees. The haunted faces of the Cryptonauts want to stand, simultaneously horrified and steeled, as a piece of unique artwork for all to ogle. A gray plastic miniature simply wouldn’t fit in this particular environment.

I of course can’t offer a definitive take on this design as it’s early days and I’ve played with an unfinished product. I can come out and exclaim that my experience has been gripping and tense in all the right ways. My players have fallen in love and everyone is clamoring for more Cryptic Explorers. 2020 watch out, because the competition is already fierce.

You can find Cryptic Explorers on Kickstarter here.

← Are you not entertained? A Proving Grounds Review
Hako Oh No – A Hako Onna Review →