Netrunner is a church. Those who seek it must first contact another member and begin the divine rights. You then try to fit in with the congregation, mumbling odd phrases and proprietary language. Tithing comes in the form of little plastic blisters containing cardboard theological teachings. It can consume your life as you become engulfed with the cyberpunk catechism and find spiritual awakening. Those on the outside don’t understand. They can’t. 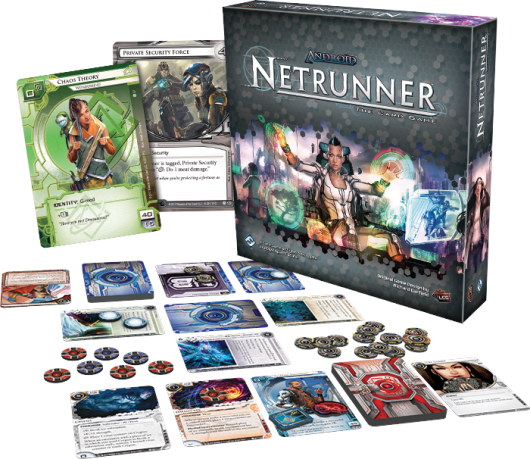 I assume you’re a member or you wouldn’t be here. I went through a long drought where I lost my faith; turned my back on Jackson Howard and the Beanstalk. I sold my ephemera and thought I’d never return. But now I’m back. The machine has me.

One bank job later and I’ve tossed a few hundred into the fire, emerging out the other side with a revised core set, enough cardboard uppers to choke a Muppet, and the exalted Terminal Directive. This is Android: Netrunner: Legacy. That concept alone is the liturgical equivalent of shooting adrenaline into your ding dong.

And that sounds marvelous on paper, right? Wrong. You inject adrenaline into the heart, dummy. This is simply painful and will cause you to question nearly everything about what you know.

Injecting adrenaline into your danglies.

A large number of people want to quietly pat this one on the back as you do with your drunk uncle weaponizing slurs. But he’s uncle Pappy, what are we supposed to do with him? There’s a spot behind the barn suitable for an impromptu firing squad. Burn this bastard down.

Yes, I’m being a bit facetious, but I have to bring the fun because Terminal Directive does not.

There were moments. I was getting back into Netrunner and all jazzed up. You’re limited to a couple of identities and the small pool of cards found in the core set. Limited deck building is allowed, and new cards slip out the wrapper via unlocks. You even get to place stickers onto this large postcard that represents your progress.

Surprisingly, very little of this is noteworthy.

Incrementally adding new cards is white hot and it fits the LCG model perfectly. Allowing us to get away from the constant grind of breaking down and assembling entirely new decks is perfect. There’s a sense of familiarity that arises which provides a shortcut to hyper competitive play. It allows a meta-game to breathe within the space of only two players committing to each other for an extended run.

This alleviates the natural burden of Fantasy Flight’s release schedule. The only problem is that unlocking new cards in Terminal Directive is like digging in a can of mixed nuts, only here all the bits no one wants have been replaced with even worse junk. Oh, you were hoping for a run-of-the-mill peanut? Have a raw kidney bean, fella. Maybe you were going to settle for an almond? Screw that, chomp into an acorn. Yes, there are cashews like the sweet Sneakdoor Prime, but you have to complete Andy Dufresne’s pipe crawl to find them.

Most of these unlocked cards function as catch up mechanisms. After all, if one side is lighting up the other like a neon Christmas tree then you need a way to rise out of the gutter. These attempts to enact global penalties and effects are indeed interesting at first. They quickly devolve into annoyance.

Of similar aggravation are the stickers. You usually are presented with two options, each pertaining to an aggressive or defensive ethos. When you make the choice you don’t know what the final effect will be. So you kind of halfheartedly grumble and commit. Then the game provides some kind of special ability you slap onto that New Angeles postcard such as “Draw 1 Card Every Time the Corp Scores an Agenda.”

Neat. Except you only remember to do this once or twice a game. Your big sheet has several such stickers, including obsolete elements that you checked off several plays back and can no longer use. Often times you will ignore this sheet entirely as your attention is caught in the throes of something exciting, you know the actual game of Netrunner. All of this sideshow spectacle is a distraction that adds very little. It feels like a fan penned an expansion in all the wrong ways, bolting scrap and debris to a Rolls Royce.

It’s fuss. The sad thing is that it could have been worth the trouble.
Perhaps If the narrative was engaging or even meaningful. This is a Legacy game that really struggles to understand the importance of buy-in and reward. No, that card I don’t even want to add to my deck is not a reward for sticking by your side you cardboard floozy.
Ask someone who has played Terminal Directive what’s going on in the story. I bet they can tell you the setup and the final moments and that’s about it. Everything in between is nonsense and a blur. Inez Delgado? I don’t even know who that is anymore. A long lost bioroid out on the town? You can’t hear me but I’m making a loud fart sound with my mouth.

This criticism concerning the story is the crux of the failure so let’s take a quick look. 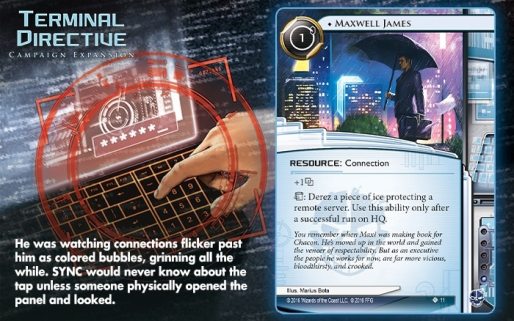 You will trigger a new unlockable by winning with a specific card in play or hitting an objective – such as win three games. The new pack you access will offer a sticker choice, a new card with multiple copies, and a paragraph of flavor text. All of this isn’t bad in theory, but the narrative framework is as barren as a desolate moor. There’s little continuity and it’s like watching a 15 second commercial filmed in hyper shaky cam, somehow tied into another 15 second vibrating hustle you watched a week ago, maybe even longer. Then you realize the new card sucks. Then you question why you’re wasting all of this time instead of playing the actual game you came here to play.

The initial pitch portends a murder mystery, but the only missing element you’re left to hunt down is the actual story. It took us 11 sessions to complete the thing but packed enough meaningful prose and incremental content gains for six or so plays. In many respects this felt like Scorcese’s recent film The Irishman; bloated and excessive with scattered flirts of greatness. At least there you get to watch Deniro for the entirety of the ludicrous run-time.

This is quite the dabbler. It offers a drip of cards, stickers here and there, and brief notes of what’s supposed to be a thriller. It fails to avail something holistic or enveloping. It refuses to wholly commit yet continually asks that of the player.

Like Terry Malloy, This could have been something to behold. It could have featured a story book with branching scenarios. Your narrative decisions could have resulted in special setup rules and unique situations. It’s shameful to think such a creative game was shoved into a container devoid of any creativity.

As a release, this one is lost. It’s an over-sized box whose barren interior reflects the product’s position. It doesn’t further the Legacy model and it doesn’t harness that format to enhance its base systems. It’s a gimmick in a game that doesn’t need one. Most recommend you buy it simply for the handful of additional cards you can play with. In that respect, it’s an overpriced data pack whose sole purpose was a harbinger for Netrunner’s end of days.