I always thought Wormtongue was misunderstood. During his appearances in the Lord of the Rings he gets shafted by Tolkien, often described as a serpent. He had performed Saruman’s bidding by working to weaken King Theoden of Rohan; his motivation being his love of Eowyn, the king’s niece.

Maybe he was a sycophant and manipulator, but he did it all for love, baby.

Now the Wormtongues, the Unferths, and the Little Fingers get their day. You get to crawl out from your rock and leap into a new shadow, this one cast by a throne not long for this world.

I’m talking about A War of Whispers. 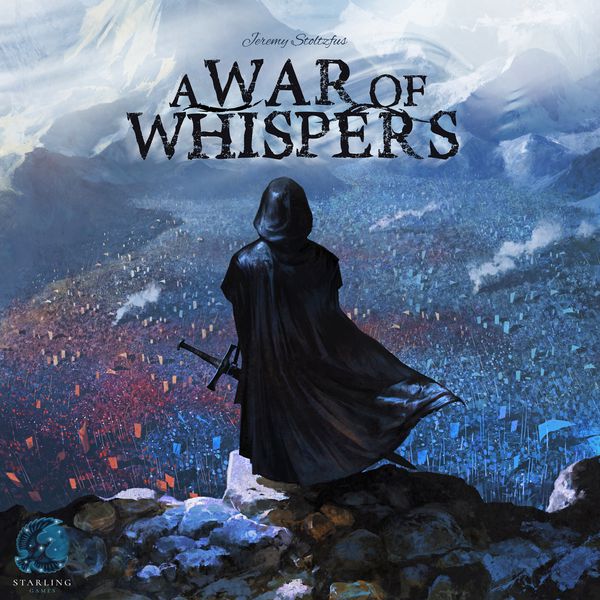 This is an area control game where you don’t own any pieces. The various armies scattered across the fictional setting don’t represent you and yours, rather they’re pawns to be manipulated and twisted in the name of your bidding. This is seedy coercion by way of worker placement.

You read that correctly: worker placement. It doesn’t really feel like one of those types of games though. This isn’t Agricola. You place your little agent pawns – dudes representing your various henchmen poisoning the noble’s ear – around the circular board to occupy council positions of each faction. These positions segregate absolute control of the nations by breaking their agency down into micro actions.

So if you want to move the lion people’s armies you need to occupy their Sheriff office. If you’d rather control where their troops are recruited then seize the Marshall position and so on.

There are some tricks here. Most of these agents will stick around. It’s not a typical worker placement game where the spots are cleared each round. Instead, each player pulls back only a single agent but places two. This leads to an ever tightening grip and greater contention in the latter portion of the four round game. And this one moves quick as hell so that sensation of strangling sneaks up on you rapidly in the 60 minute playtime.

Additionally, if any seat is empty after everyone has placed then the first occupied seat next in order gets to execute its actions. This elicits a push your luck element where maybe I position my worker an office or two down the line, hoping no one else takes the Sheriff space I really wanted. This is clever and creates some early tension as risky placement is encouraged. 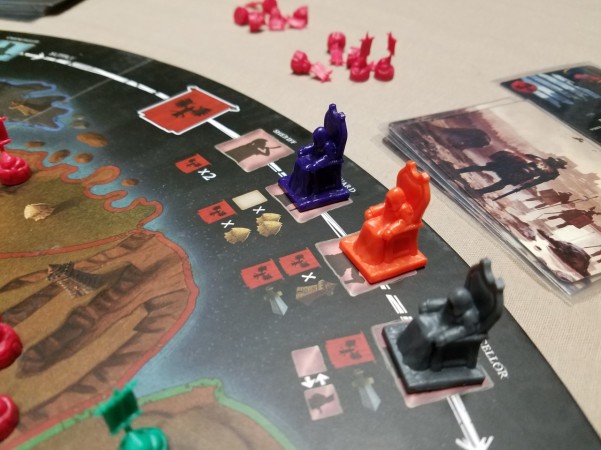 So what’s the point of all of this? Yes, Wormtongue gets Eowyn but what do you get? Well, you get points silly. Because of course.

How your points are determined is the interesting bit. At the start of play you’re dealt random allegiances to each of the factions. Some houses you favor more directly, receiving a bounty of points for each stronghold they possess at game’s end. Others you’re ambivalent towards and one specifically you actually lose points for their success.

So with a random shuffle we already have underhanded motivations overlapping. This is all secret because I don’t know which nations you favor and which you conspire against. I have to deduce this from your actions on the board. Yes, it’s all starting to come together.

This is the central accomplishment of A War of Whispers: it succinctly captures layers of scheming and manipulation with absolutely no waste. It’s a 60 minute area control game that achieves some of the devious plotting and crooked angling of Imperial.

And it works. It works at four players and it works with three even better. It just bustles along with a group that’s not overly susceptible to analytical hesitance.

As I said, the element of worker placement doesn’t feel so. You’re not grabbing one cube to convert to another, you’re seizing positions of strength so that you can control where the blue or red people will attack. Since you’re never afforded total control it feels as though you’re acting within the scope of a background adviser, giving the nation a nudge in a certain direction as you try to untangle the puppet strings. This ability to convey such atmosphere and emotion to the participants is exemplary and what makes this design appealing.

And yet that sensation of skirting so close to greatness is ultimately fuel for disappointment. This game, while certainly worthy of attention, is not the smashing success it could have been. It’s not the thundering hooves of Rohirrim that it desperately wants to be. This is because it’s too streamlined. Every rough edge is sanded off and the semblances of personality peeking above the surface remain just flitters of what could have been.

The main mechanism of hidden alliances is the first culprit. There’s clearly a problem here that the game must reconcile – what if two of three players randomly receive the same point multiplier for their highest amount? Or even their lowest? Their completely randomly allocated alliance will have them working in tandem, certain participants scoring bushels of points by merely riding along in the backseat. Meanwhile you could be on the other side of it, your primary nation battered about like a poor pinata bleeding sweet innards.

So they ease off the gas and provide a life preserver. Now you can swap the position of two of your face-down faction tokens at the end of a round. The penalty here is that they’re flipped face-up so everyone can see.

This does matter, sure, but it’s minimal. The bigger issue is that the main forces at the heart of the game now allow you to skirt any investment. So why work at all?

This philosophy of how it intersects the players performance with their motivations is far weaker than the more overt and audacious system found in Pax Pamir. War of Whispers is unable to pull off the same effectiveness because it minimizes the repercussions and streamlines the process of flip-flopping.

Now, the designer has offered an interesting house rule – found online and not in the rulebook – of rewarding a bonus point for each token that remains unchanged. This is not only recommended but necessary in my view. There needs to be an incentive to work with the hand you’ve been dealt otherwise you run the risk of a loafer securing that which they did not earn.

The muted sensation continues in one of the game’s strongest moments. Each faction has a space which awards faction specific cards. These are played from your hand to trigger some pretty wild effects such as placing armies in each of that nation’s empty borders or perhaps executing a daring raid across the entire board. Even these are reigned in, however, as every single card for a specific faction is mostly identical. The strongest effect on each is unique, but the cost of these is so high that you will only see them executed once or twice per game. The drama here is shades of gray when it should be technicolor.

I mentioned investment earlier. This game struggles with that concept. If you’ve noticed I’ve referred to the factions by both their color and animal signet in my writing. This is because they don’t have a name. They’re all but faceless, given what little personality they possess by some truly excellent illustrations, but it’s not enough.

Wormtongue’s betrayal is so harsh and bitter because it’s personal. Betrayal is an intimate act and A War of Whispers is about as intimate as kissing your Grandma. It sacrifices any sense of boldness in favor of complete playability and a miniscule time requirement.

This works, as a game, that is if you consider a game a set of mechanisms to be twisted and bopped. As an experience this title suffers because it doesn’t pull you in, content to move along at breakneck speed like a J.J. Abrams film. Sure, everyone’s quietly content but no one is standing on their seat and declaring A War of Whispers their true love. 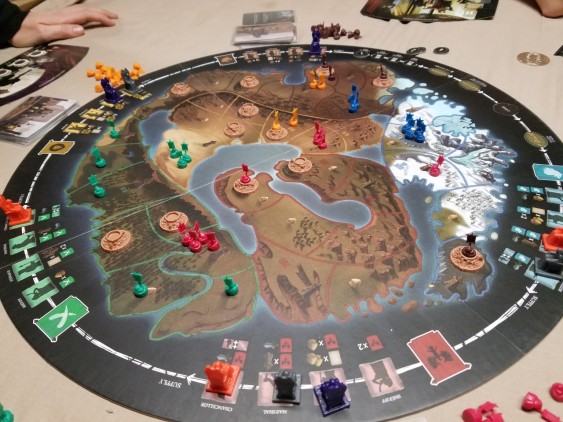 We’ve been given a very competent and fun design. This game works and is smooth. It accomplishes the unthinkable in presenting a worker placement game that doesn’t feel at all like worker placement. It has a few delightful moments scattered throughout but it’s ultimately just a very solid and slightly meek experience. I’d be happy at any moment to play this one again, but when I leave the table my face won’t be flush and my tongue won’t be primed with an unforgettable story.