A game’s most important quality is how it feels during play. It’s the whole point of why I write about board games and what I hope you take away when reading. It’s also the reason why I simply didn’t dig Evolution from North Star Games.

That title explored an interesting space, tackling evolutionary theory in a very playable and surprisingly short time. However, it was more concerned with elevating strategic play and counter-play in service to a deeper mechanical system. The process of altering your creatures served a precise purpose of competition and left the moving parts as a shallow representation of the design’s thematic narrative. 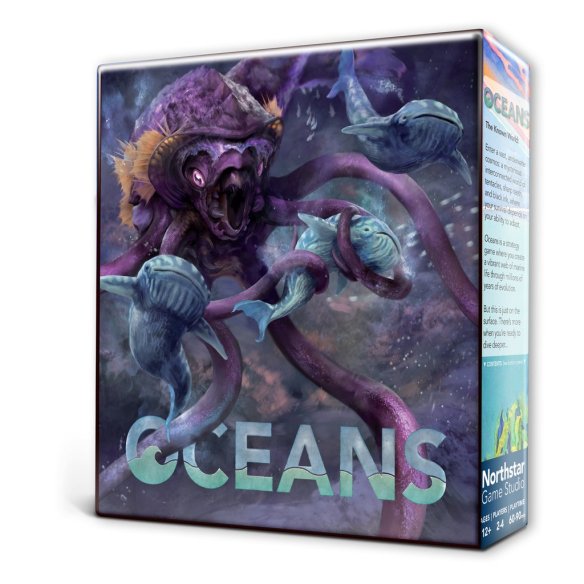 Oceans is a different animal. This title feels more dynamic and alive. It uses the framework of its predecessor to establish a unique approach, elevating its thematic underpinnings instead of burying them.

How it does this is by establishing an ecosystem. This is ostensibly a tableau builder, each player throwing down cards to create and evolve their own personal set of aquatic beings. But each creature subsists on and influences a delicate environment.Feeding here is entirely predatory. You can feast on the neutral fish tokens clumped together in ramshackle schools at the middle of the table, or you can grow some teeth and tear chunks out of each other’s population. Both vectors are incredibly interesting and allow you to shape the ecology of play.

There’s a lot we could dissect here, so let’s take a peek at some of the nuance. Filter Feeders are the large beasts swallowing truckloads of those piled up fish in the middle. They don’t directly harm another player but their paired strategy certainly affects every participant. This is because they eat from the reef.

The reef is this tray of fish separated from the others. It doesn’t get filled on its own, rather, a player must spend an entire action – nearly all of their agency in the early going – to migrate fish from the ocean piles to this reef area. Where you choose to pull from though has large implications.

The largest reservoir triggers the end of the game when emptied. You can accelerate this out of control bus by repeatedly draining that not-quite-bottomless pit. Or you could shift a cluster of Boop Boops from a different area, one that when emptied triggers the electric Cambrian Explosion.

The Cambrian Explosion was basically this radical acceleration of evolution that occurred 541 million years ago. Think the most ridiculous and memorable party Tony has ever thrown and then kick it to 11.

In Oceans the Cambrian Explosion is likewise, sick. Instead of one action per turn we now perform two. Instead of each species losing a single point of population, they now also lose two. This means everyone is playing twice as many cards and scoring twice as many points. Aging your creations is the path to victory, but it places a terrible risk of going extinct.

Keeping your species alive while trying to influence and react to the player controlled ecosystem is the very heart of this game. The challenge is that you’re only able to feed with one of your organisms. If they don’t feed off the reef as we discussed earlier, they’re directly chomping on another creation in play, effectively draining them of population which are victory points in waiting.

Your initial reaction is that this is quite mean, and that’s sort of true if you delve into the math of lost point potential and gaze into some of the environmental reverberations at work. But the feel of the game is not at all punitive despite a wealth of seemingly negative interaction. Because each species is in constant flux and population turns over at such a high rate, it never feels as though you have the boot to your neck. In fact, it’s impossible for a player to outright kill one of your species as they only die off if they’re unable to age at the end of your own turn. This allows some breathing room and a phase of feeding to exercise before the watery grave is dug.

All of this works in concert to deliver that player created ecology that beckons input. You’re never in control and things can easily slip out of reach which births this ever present sensation of mystery and wonder. That spark is elevated superbly with the Deep deck.

In sharp contrast to the standard common trait cards, the Deep deck is a large stack of entirely unique options. No two cards are alike, establishing this bounty of traits that feel as otherworldly and special as their descriptions. When you add chitin plating to your octopod or evolve your puny leech into a Kraken – oh yes you can – there’s a palpable feeling of wonder. It nourishes its own hyper-reality and offers an atmosphere that captures some of the emotion of unusual fiction like The Abyss.

Of even greater surprise is that the shortcomings are all minor. The most immediate issue is that this plays best at three players, although four is not too far off that sweet spot. Two is too few as the ecosystem is not quite developed and that sense of unpredictability is not fully harnessed. Five or six, capable only with expansion content, features far too much downtime and the pace suffers terribly.

I did have early concerns that the strong reliance on establishing an engine of a feeder and then cleaners to trigger off your own meals was the common go-to strategy. This is sort of accurate, but the nuance of resource control, scenario cards which shift the rules each play, and the interaction of Deep traits provides for distinct end games that don’t prove repetitive. 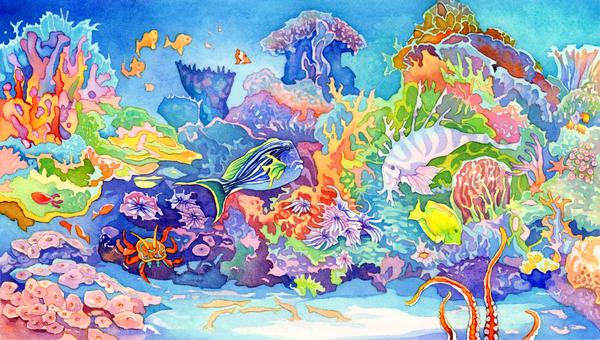 The most significant quibble with this design is likely to be rooted in its tableau building DNA. While Oceans is highly interactive and surprisingly subtle, more often than not there are too few tools to reign in someone who’s established a potent engine. The game is in fact a race to this state as you can’t typically remove species that have hit a terminal velocity. This does have the potential to sap some of the wind from your sails, but it’s usually triggered so late in the game that it never feels a cheap victory.

And this last issue is really my only significant criticism. The depth and nuance of play makes for such an entertaining playground that my pleasure rarely gets sidetracked. The atmosphere is exceptional and the theme is invariably strong; this is the main driver of the title’s success and what fuels my desire for exploration.

Oceans is sharp. It’s dynamic and highly interactive without succumbing to shallow ‘take-that’ play. It’s unpredictable and acutely compelling due to the fantastic Deep deck and scenario cards. It’s everything I wanted from Evolution and a few leagues more.