This is literature emblazoned upon cardboard, the classic tale of hermits caught in a labyrinth and forced to battle to the death because that’s what the magicks are for. Wandering a maze like rats wielding switchblades and fireballs – there’s nothing quite like it. You’re one of these rats and you’re out for blood, and treasure, and more blood. This is one of the rare titles that actually deserves a family of exclamation points.

Let’s get to the rules of war. We each get a plastic wizard in a pose doing wizardly things, like running or standing still. You also get your own special large square board that makes up a portion of the battlefield. It’s riddled with walls and nooks and crannies for a fool with a pointy hat to get lost in. You take the board and you toss it in the air so that it spins like a top. Once everyone’s done this and the orientations are randomized, we connect them. Now we have our battlefield; steel your nerves and fluff your beard.

Each of these little plastic wizzes are symmetrical. You don’t get any unique powers or variable abilities. I hear you protesting, but this was designed in 1983 by a sorcerer named Tom Jolly and he doesn’t care if you feel special. His last name is Jolly for god’s sake; trust in the genius.

Then we get cards because all good games have cards. This is the secret of Wiz-War in that it’s really a card game. 90% of play is encapsulated in your hand as you come across hundreds of different spells and plenty of text to read. By the end of the session you’ll feel as though you’ve read a novel of cantrips and are all the smarter. You won’t be but that doesn’t matter.

These spells are nuts. This is why Wiz-War is special. You can do things like create a new wall on the map. You can eat walls. You can turn into a werewolf. You can throw down a hex that randomly teleports those brave enough to move through it. You can rotate sections of the board. You can flood the entire map with water. You can summon a snake that moves through walls. You can summon Grendel and no one can summon Beowulf. 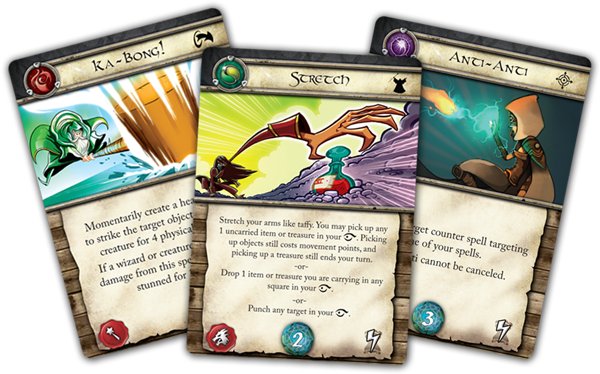 You can cast as many of these spells that you have in your hand as you want, with one major exception: you can only perform one attack on your turn. War has limits.

The attacks are all over the place. You can burn down a neckbeard with fire. You can extend your hand down a hallway and slap them across the mouth. Sometimes you can blow up a wall and have the shards of stone cut into their geriatric flesh. There’s even a lightning bolt that bounces back and forth off walls dealing significant damage every time it hits you.

Someone gets trounced with a massive spell nearly eliminating them early in the game (YES, player elimination because the Jolly man doesn’t care about your feelings). Mauled person complains. I tell them this is Wiz-WAR not Wiz-Peace. Aaron laughs. We play and we play again. Lovely.

What makes this design such a compelling experience lies in its fostering of creativity. With a toolbelt of hundreds of crazy and over-the-top spells, you will come across new combinations and abilities every single time you play. The first time you see someone throw a lightning bolt around the corner and keep it bouncing for ages is special. The first time someone walls themselves in a dead end then casts some evil trickery to swap places with another player trapping them in the coffin – holy shit. This is glorious Ameritrash as it was meant to be.

There are a couple of gotchas with this one. You’re likely to be playing with Fantasy Flight Games not-quite-excellent 8th edition from 2012. It’s a thing of beauty and does the game justice from a perspective of componentry. The rules, however, need a bit of a magic boot to the junk.

As FFG is wont to do, they’ve tinkered with the rules. Usually this means they mess things up just a tad. All is not lost for this can be fixed. They graciously included the important variants in the back of the rules to massage this into the gem it used to be. Important touch-ups like making creation spells permanent and outside of your hand are 100% necessary to milk this goat for all its worth.

The problem with the new rules is that they lead to play that’s about racing around the board and hauling treasure like a magic version of Two Guys and Truck. This is a game about war, the oldest of human vices. So blow each other up and get on with it.

That blowing each other up can get a little long too. Most of the time you’ll be done with your war in a half or quarter hour. Sometimes it stretches to an hour and you may have to sit twiddling your thumbs. It’s your own fault you charged through a rose bush to fight a minotaur and then were smashed with a huge a mallet. Sometimes though the randomly aligned corridors lead to two players rushing you out of the gate and stealing your shinies. This is a highly random and swingy game and those with a heart murmur may be better off playing Spades.

That unhinged chaos is where it hits the highest notes. Every game is sort of a grab bag of random mystery and sometimes the building will explode and you’ll feel like you’re riding a shark atop the wave of fire. Others will feel like you’re drinking a cup of spoiled milk and hair shavings. It’s always silly and there’s always a few amazing moments where everyone can stop and point, burning an image in their brain and a story on their tongue.

Wiz-War is one of the best of games. It’s unparalleled as a gladiatorial butting of wizened noggins. There’s little fluff or complication as you simply move and play cards. There’s no cruft, just war. War with wizards. War that you don’t want to miss.

← The Reveille
Making Up: X-Wing Heroes of the Aturi Cluster →

8 comments for “The Mad Genius of Wiz-War”