And I thought writing about Root was difficult.

Yellow & Yangtze is the sequel to Tigris & Euphrates no one asked for. When Grail Games announced this peculiar title, I cocked my head and sort of mumbled to myself. Yeah, that happens frequently enough, but here it was with purpose.

Reviewing a game can be a difficult task. It’s about providing an analytical view that you want to present as definitive, but it’s never so. Whether you play a game a hundred times or simply three, chiseling your thoughts in stone and presenting them to the multitudes represents simply a moment in time. My piece on Wiz-War is no more omniscient than if I wrote about it after my initial experience. It’s merely a snapshot of a particular view, one that’s in motion and never settles, at least until you’re in the dirt.

So this is me, writing about Yellow & Yangtze, in the most definitive of non-definitive ways.

I’ve wasted enough of your time babbling, let’s get to the point: Is Y&Y better than T&E?

I have no answer for you. From a critical perspective, it doesn’t exist. More accurately: It’s complicated. Let me explain with a thousand more scribbled characters.

Both designs are exceptional thematic works. They condense many many years of historical upheaval into a gripping hour of satisfying hobby. The main loss in transitioning from Mesopotamia to China is in chaos. Yellow is simply a less dynamic design than Tigris.

This primarily occurs in conflict. In the OG clashes resulted in massive swings. A mountain of tiles would be swept off the board into a kaleidoscopic junkyard of cardboard. Civilizations would collapse and expand like a tidal wave bearing down upon a fragile coastal town. An action here and an action there, two large societies connect and the piñata explodes. 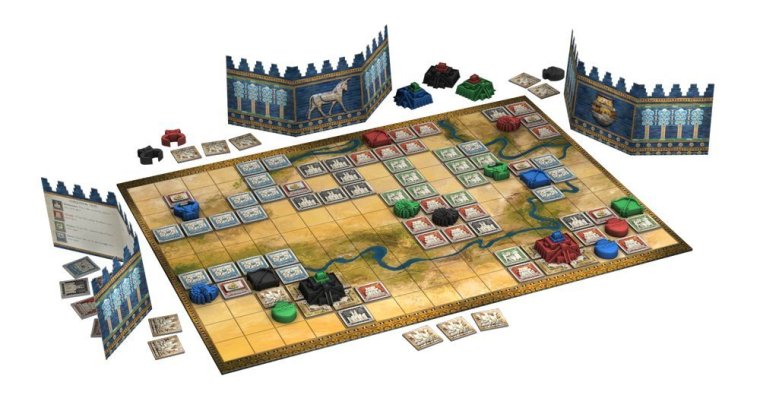 The timing of when to engage in conflict and have the prescience to take advantage of the resulting swing is a large cut of T&E’s identity. It still owns this as Yellow & Yangtze reigns in the drama and lances the tension.

External conflict in this newfangled work is always performed with red “soldier” tiles. Likewise, those are the pieces removed from the board and discarded to the bin after the flames settle. When worlds collide much less ends up fractured. The winners have more ground and infrastructure to gain, however you only receive a single scoring cube of the color at conflict. So not only is the board state less twisted, but point gain is a bit more even and mellow as well.

One way to view the above division between designs is through the lens of their subject matter. Tigris & Euphrates represents many centuries of development and strife. It’s a wide slice of history as civilizations spring from the bones of their forefathers. Upheaval is just another day of the week.

Yellow & Yangtze, however, presents a more narrow view of geo-political instability. Taking place from 475-221 BCE, it’s capturing a thematic tone that’s altogether different. In this way, you could certainly make the argument that Reiner Knizia has not lost his edge. Sure, Y&Y is less dynamic, as that’s what the design calls for.

Now, this doesn’t change the fact that the chaotic, almost Ameritrash play of Tigris is more compelling. But at least we have context and can develop an abstract appreciation.

War (external conflict) is also reimagined in a more simpler structure. In a battle with multiple colored leaders facing off, you now simply have one large fight with all of the leaders of one side allying against the other. This opens up a bit of negotiation and above table play that’s very enticing. Perhaps more importantly, it’s much easier to internalize for newcomers.

Tigris is a rough game to introduce. The rules are simple but the concepts are difficult to grok. It’s an awkward game in your early plays as you fumble around like a shy teenager interacting with a love interest. Not everyone makes it past that initial dance and some move on. Yellow streamlines the most egregious of these elements and produces a much smoother overall experience.

Let’s move on to the board. I’m talking about the switch from squares to hexes. This I’m totally down with.

The map feels more open and easy-going. You can readily buffer up a leader by surrounding them with black politician tiles – those used with internal conflicts – and the struggle for position is less deliberate. Pagodas, the new fancy term for monuments, are also more easy to build and are slapped down more frequently.

This is significant because if no pagodas remain of that particular color then you steal one. You pluck it up from the board and place the mother in your budding society. This contrasts sharply with the less dynamic war mechanism providing a very fluid experience of shifting strength.

There’s an interesting focus here on the single gold pagoda. This new color replaces the isolated treasure tokens of Tigris. Gold becomes highly fought over as a means to buffer scoring, with that bright yellow building hopping about the board.

The shifting atmosphere is emphasized with a few other clever twists. The strongest is the mechanism of retaining leaders. Leader tokens that have not been placed on the board provide bonuses in different facets of play. For instance, you receive +1 to your army strength in War if your red leader is in reserve. Your blue leader on the other hand allows you to spend one instead of two blue tiles to blow up a space on the board (mimicking the more limited purge mechanism from its predecessor).

This concept of holding back adds weight to leader placement and civilization structuring. If you possess a large number of scoring cubes of a particular color, you may opt to keep that leader off the map once removed. You can now shift to a more aggressive pursuit and lean into the bonus.

Additionally, it’s a small catchup mechanism. If you have a leader ousted you now have a passive bonus activated. Overall, this feels very satisfying and it’s a huge boon when moving to this new design.

The final detail I want to approach is the degree of randomness. A sharp criticism of this system is that your potential is limited by the tiles you draw. The space it operates in consists of input randomness – it provides the user with a jumbled set of options and asks you to perform your best with that draw. You need to be agile and tactically limber.

Yellow pulls out a new trick. Whenever you place a green tile on the board you can refill one of your tile selections from a public offer instead of the bag. This allows you to tailor your strategic approach and make up for a poor draw. It’s delightful because it melds with the other sensibilities of the design offering direct rewards and unique abilities for the different colors. It streamlines the complicated conflict mechanisms while adding depth and weight to other aspects of play. This comes at a risk of overcomplicating the elegance, but it never falls to that threat and manages to remain quite svelte. 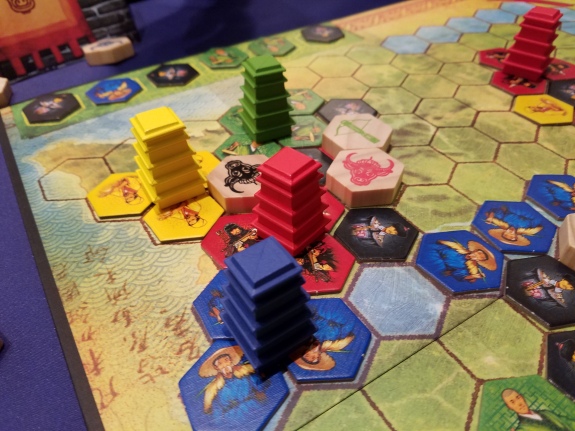 The most thought-provoking aspect of this release, and that which seems seldom touched on in early conversation, are the principals which guided Reiner Knizia to re-approach his finest design. There’s a lot of discussion focused around the “what” and “how” of Yellow & Yangtze, but not much about the “why”.

Why redesign your most lauded accomplishment, a game which will exist outside the decay of time and persist for generations? If you examine the details of all of these changes and shifts in structure, you can read between the lines and find that interwoven philosophy. This is a more forgiving and lenient design than its progenitor.

You can more easily place monuments, seeing quicker payoff. It’s easier to buffer your leaders on the board. You have more control over which tiles you pull. External conflicts no longer require the hoop-jumping of procedurally stepping through each subset of factions at war. Leaders forced off the map still provide bonuses.

It feels a little less enigmatic and a lot less brutal. This approach of mollifying the design is effectively modernizing it. For better and for worse and all that jazz.

So, yeah, I don’t know. After a handful of plays I can’t rightly determine which is the stronger of the two siblings. I will say that I’ve had a far better experience teaching Yellow & Yangtze to newcomers, all of which have enjoyed it.

And I’m smitten with the ways in which this design has grown – new uses for colored tiles, more lively monuments, and the forming of momentary alliances – but I still find myself hankering for those colossal shifts in board state. I want nations to crumble before my eyes and dust to settle over the corpses of a once proud people. I want the swansong of achievement to float through the air like fiery motes on the edge of extinction.

I really want to have my cake and eat it too, I suppose (that’s what cake is for afterall).

Let’s do this dance again in another 12 months. Maybe then my definitive non-definitive review will be more definitive.

← A Choose Your Own Adventure: House of Danger Review
Dune: The Board Game: The Book Club →