Everyone is tense. Somewhere in the building a bomb is about go off. Lenny is a cop, but he’s no ordinary 5-0. He’s a badass with a 12-gauge and hair that’s as out of control as the era. He’s the star of our impromptu little film.

The rest of us are hostages. When those bad mofos charged into the bank everything changed. Dog Day Afternoon, Inside Man, they all had it wrong: This was over in a hurry.

Lenny busts through the doors of the bank, glass spraying across the lobby. No one fires. The perps weren’t taking up defensive positions or loosing hellfire. No, they were hiding. Among the cluster of terrified hostages, the ne’er-do-wells bide their time. It was that kind of day.

This is Countdown: Action Edition, or rather, it’s the setup. It’s easy to be swallowed up in the neon 80s facade of that box. Everything bleeds cool and the game is an easy sell. 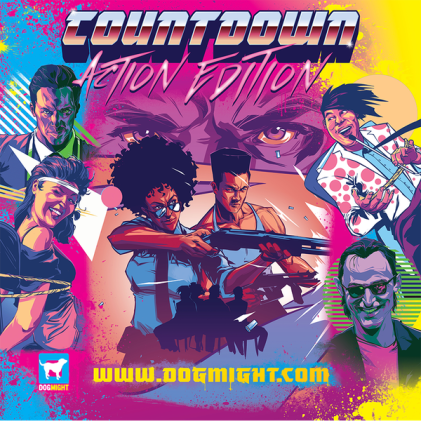 Commitment is key. The experience here is predicated on roleplay and improv as it asks participants to slip into character and chat it up. It’s a social deduction-style design where one player – the action star – wants to identify the bad dudes hiding among the hostages. This must be done before the bomb goes off.

The philosophy here is delicate. Countdown wants you to ham it up and roleplay as Bruce Willis or Mel Gibson (sans anti-semitism of course), but it also wants a structured framework to conduct the theatrics.

To get there it borrows liberally. By that I mean it stuffs a pinata with every noteworthy social deduction release from the past ten years and gives you the stick. “Swing away” it commands.

As you tear fist-sized holes in the paper mache the sweet bits begin to pour out. Let’s keep score: We have a bomb and President cribbed from Two Rooms and a Boom. In the beginning of play you pass around a hand of characters and select your poison, a la Mafia de Cuba. There’s a secret Hitler ganked from you-know-what. Don’t forget the lively drunk from One Night Ultimate Werewolf. Finally, a “Big Time Wrestler” from, well, you got me there.

That’s not to say Countdown’s initial appearance is rubbish, but it certainly puts it behind the eight ball. This is comical though and certainly fits the campy veneer. I admit, I dig it. How many games allow you to play Hitler’s brain-in-a-jar? Exactly one, I imagine.

So, actual play. The action hero flips a “countdown” card. This means we’re inching closer to the bomb exploding and tension is slowly elevating. It also directs the hero and pushes play forward.

The main character is given a couple of options. They can release a hostage, effectively changing the status of a character and affecting various win conditions. They can ask a specific question listed on the card. These are one-liners like “What kind of clothes are you wearing?” and “What did you do yesterday?” Or you may be able to ask a yes/no question of your own devising. 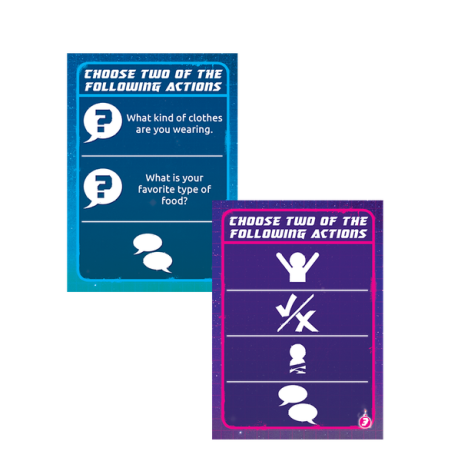 You may have read between the lines but Countdown doesn’t work. It’s impossible to hold back any longer so let’s just tear the bandaid off.

This wants to be part roleplay and part social deduction, but the latter is non-existant. There’s no real mechanism to deduce anything of value. Sure, I can ask you what you’re wearing (in a non creepy way). The game requires you stay in character and tell the truth. If you’re the POTUS then you’d say something like “a suit and my magnificent smile.” Sure. Maybe you make a Trump joke and we all laugh. Good times.

Now, if you’re a villain you can say whatever you want. So you choose a role from those available and you lie.

“I’m wearing a suit and an American flag pin on my lapel.”

Wonderful; two players are claiming to be President. One is lying, of course. Now what do you ask them to figure out the truth?

No one really knows.

You can ask more questions about your profession but it never leads anywhere. Players can channel their inner Daniel Day Lewis and leave it all out there. But the game, that important core at the heart of the proceedings, it never works. Side conversations, asymmetrical win conditions, and even some juicy starting information based on those characters passed around – none of this really adds up.

There are interesting scene cards that let you interrupt and take over for a moment. Hostages play these to gain some camera time and sweat under the spotlight. They’re a neat concept but that’s about it. As a humorous example, Aaron was the last player in a recent play. His action scene card allowed him to look at the remaining characters that no one chose. This could be insightful as it would allow you a modicum of information to base your otherwise blind hunches on. The problem is that Aaron was last to select and already knew what was left over. Oh well. 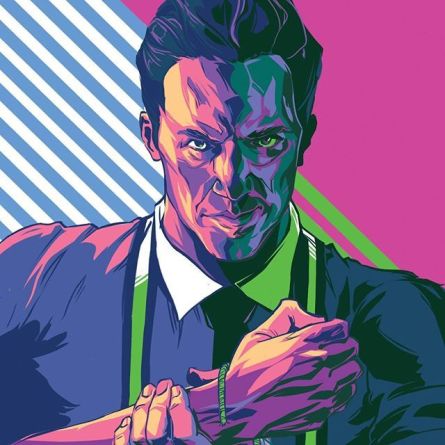 The concept of action film roleplay with a legit social deduction game is wild and exciting. Countdown isn’t that, however. It never gets there. It asks you to bring the fire but doesn’t pull its own weight.

Mechanically it hews closest to Two Rooms and a Boom in feel. Not simply because of the bomb, but because of the open discussion and behavioral focus. This perhaps best illustrates Countdown’s shortcomings. Two Rooms features many roles which force interaction and there are actual mechanisms for attaining hard information and then sharing it. Countdown leans harder into roleplay but never offers concrete information to grease the wheels of conversation.

It could be utilized as a tool to spur improv and drama. There’s certainly a crowd that would find this enjoyable and may not care about the lack of compelling gameplay. Unfortunately, in this format the experience is far too rigid and clunky. You don’t need all the extraneous elements such as characters with hidden objectives or structured discussion. There’s all these cards and decks and it’s a degree of trouble without much benefit.

The closest analog are those murder mystery “games”. They have no real mechanisms but act as an excuse to dress up, use an accent, and get drunk. Not because you have a card that calls it as it sees it, but simply because you want to be numb.

I don’t know what to do with Countdown. It’s a neat little box with some clever ideas, but it forgot the game. You can’t forget the game.

← Dune: The Board Game: The Book Club
Yesterday, Today, and Tomorrow – A Retrospective T.I.M.E Stories Review →