It’s Gen Con, 2015, and I’m moseying around a small room. This particular small room is in the back of a beaming restaurant. It’s a private Asmodee press event where they showcase demos of upcoming releases to members of the media. I don’t know any of these people. I feel out of place and small.

Then I come upon this table with this game I hadn’t heard of. I sit down next to a well known media personality and his wife; we begin.

Like a needle to the vein, the game delivers. Immediately my brain is tethered and my senses tingling. We spend twenty minutes stumbling around an asylum in the 1920s, our sole accomplishment retrieving a bathroom plunger for a man in a suit. He may or may not be mentally unstable but it doesn’t matter. T.I.M.E Stories is what matters.

It’s partially a Choose-Your-Own-Adventure thing but it’s mostly visual. You enter a room or location and lay out a row of cards depicting the scene with a panoramic view. Each player can then split and go to a different card – section of the room – or you may team up in case you run into a violent git and it comes to blows.

Unexpected things happen, you see, and that’s where the intersection of mechanisms and joy occur. Sometimes you come across puzzles. Other times you run into traps. Maybe you collect an artifact, out of place in this particular period of history.

At times it feels as though the design space is wide open. The game an engine for a different body with unique contours and doo-dads. Each release uses a few generic token types to present interesting challenges and narrative quips. The same token may represent narcotics your addicted convict struggles to resist, or they may represent ammo for the firearm you recovered. The execution is solid and each module feels writ upon its own cloth.

The objective is to prevent a catastrophe from occurring. You’re working for this sterile and vaguely creepy agency. This asshole Bob continually derides your performance. He’s your handler and you will come to hate him immediately.

Accomplishing your mission is always a fuzzy goal. You need to fumble around an Egyptian village, Fantasy castle, or Pirate-infested ocean and follow the unfolding tale by its scent. The best of the adventures feature those aforementioned twists while buoyed by a slowly developing meta-story.

Yes, the scenarios are linked. Well, most of them. Estrella Drive, for instance, ignores that backbone which contrasts sharply with its peers.

The overarching plot is mostly interesting. There’s some definite shock and awe. One moment threatens to form a major divergence in the narrative with future promises. You make a key choice with long-term consequences at stake.

And this is the problem.

It never really delivers. Yes, a tantalizing quip or two, maybe even a juicy development occurs. But we made this seemingly crucial decision to pick a path and the game seems to not really care. It’s hamstrung to the limited format of a single deck as it putters along its release cycle.

We’re seven scenarios in and you could wrap up the meta-narrative in a couple of paragraphs. There’s always a hint but never an answer.

It’s strongly reminiscent of episodic television, something like Fringe or the X-Files. I bailed on both of these dredges as the drip-feed of the overall story arc was excruciatingly slow. The monster of the week formula is tired and its day is gone.

It does manage to flirt with the edges of wonder due to the sheer breadth of subject matter. Pirates, crusades, fantasy, an antarctic expedition – if you have a box this game will check it. The scope, unfortunately, is never quite enough.

One of the major limitations isn’t found within the gears of the design, but in the production boundaries. Each release is limited to around 130 cards. This actually offers a solid experience in isolation, but it severely limits branching story structures, particularly from the angle of the meta-narrative. This is readily apparent as the game trudges forward and it will drag you out of the here and now as you shake a fist at what this game could be.

That physical limitation also creates a hindrance in assimilating new concepts. Each scenario has its own quirks and rules adjustments, yet they don’t include any sort of explanation material. The introduction of new sub-systems occurs entirely within cards. This means we don’t have a native FAQ or useable examples. There are edge cases. It can feel as though you’re stumbling around Jareth’s labyrinth looking for Toby and Hoggle just keeps spitting in yer eye instead of helping. Dammit Hoggle.

This is all further muddled by the fact that the game is tedious. There’s an artificial tension manufactured from the time mechanism. As you travel and visit scenes, your time dwindles. Eventually it runs out and you must restart the loop. It’s a twisted version of Groundhog Day devoid of Bill Murray’s comedic personality.

You could of course ignore time altogether. The concept is simply a man-made construct, right? It’s all relative holmes.

But this is problematic because the underlying tension of the design is then ripped from its chest. There’s no urgency, skill tests become meaningless, and the whole experience is reduced to ash. 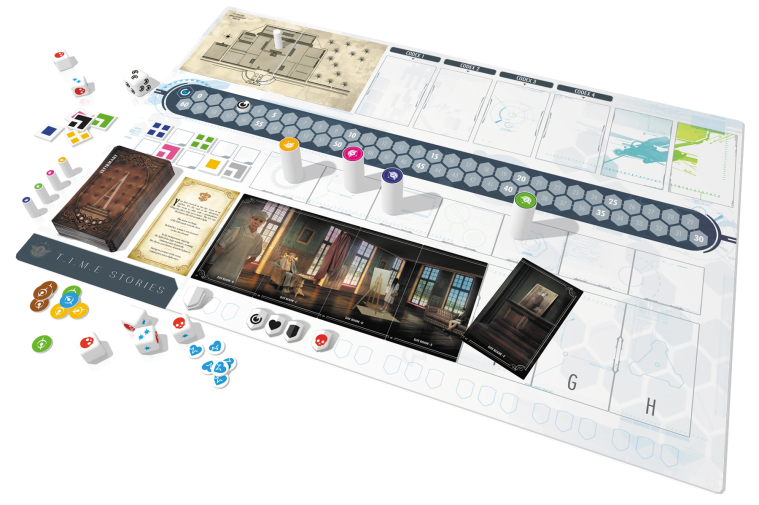 Like a legacy-style game you just want to box, we can’t turn back because we’ve gone so far. The magic has soured and the sun is partially set. Tomorrow we’ll press on, however, because we must. It’s all we know how to do.

The location is my basement and we’re in the throes of adventure. We’re making our way through Brotherhood of the Coast. It’s been several months since the last module was released and everyone is excited to push further.

That small white box is mysterious. It could contain anything. I felt that warmth in my gut just an hour earlier.

There are pirate ships, battle, and an interesting twist. None of that really matters. I’m tired. The experience is offering just a smidge of its previous high. I’m looking across my shelves and the game has lost me.

I’ll be back. In a few months my hopes will rise and my heart will stir as I remember those initial days. The relationship may be dead, but those memories will never die. I’ll be back.