This side-by-side thing is something new I’m floating. Two games whose experience, style, or spirit are somehow linked. Maybe this is the last time we’ll see this format or maybe it will explode and consume me. It’s unknown so whatever you do, don’t look away.

The other night we pulled out both Flip Ships and Catacombs. It was a night of kinetic twists with discs clacking off discs and landing upon card. I love dexterity games because they drill down to the essential of spectacle. Your action has an immediate result and your companions bear witness. Between the laughter, chiding, and high-fives, pure joy peeks its head from burrow.

Before proceeding it’s also absolutely mandatory to note that both of these releases are illustrated by the wizard Kwanchai Moriya. This man is the absolute top artist we have working in the business. He breathes life into worlds that exist only in our heads; I tip my cap to the gent.

I remember when Flip Ships hit the street. It caught my eye immediately as it appears Space Invaders by way of disc flicking. It’s also a cooperative dexterity game which is the cardboard equivalent of a leprechaun – I promise you, this does exist.

Each turn you lay out a row of enemy cards in a horizontal line. They’re placed in a grid of sorts, defined loosely by a cardboard vertical strip you place at the edge of the surface. Each turn these invaders will move forward towards your table edge which represents the planet you are trusted to defend.

So you launch ships to repel the intruders. You take one of your small discs and place it on the edge of the table delicately. In an upward thrust, you either flip or flick the disc so that it will arc through the air and hopefully land on one of the enemy cards. More often than not you will miss, perhaps even jettisoning your little Maverick-turned-Goose off the table and into the sun.

This game is hard. It’s one of the defining and most pleasing elements of the design. It challenges you to respond with anger and dedication, repeatedly launching fighters into atmo with fury and passion.

Boosting this borderline-absurd difficulty level is the mothership. This cardboard box sits at the rear of play, at the horizon beyond the invasion. In addition to killing all of the attacking space ships, you must also land an number of hits on this huge beast. To do so, you must launch a 100 yard pass through the uprights and into the square compartment. It’s maddeningly difficult.

The game offers several tools to aid. You unlock special abilities for each of your ship types as your planet begins to decay. It’s a catchup of sorts that also provides a solid arc to the 30 minute affair. A couple of the abilities allow for supplemental flicks at the mothership or course corrections upon a failed shot. Still, those final attack runs are suicide missions that most likely end with your fragile spacecraft as graffiti upon the side of a monolith.

I do not love Flip Ships. It has all the makings of a top flight game, but it simply can’t get there. That’s not to say this experience is an affront to the audience, but it’s a small cut above mediocre, it’s arm jutting out above the tepid waters of average.

A dexterity game is often made by its moments. Those actions where the entire table stands and your heart clenches its teeth. I want electricity and chaos, followed by explosive release. Flip Ships just doesn’t bring it.

The strongest segments of play do address that craving, those balls to the wall hail-mary shots into the maw of the beast. The trouble is that dealing with the mothership is such a small overall segment of play. The bulk of your action will be centered around taking out the pesky little guys, stomping on cockroaches that wield tiny blades.

“Nice” is the mantra that often breaks the silence. I don’t want nice, I want “holy shit”. 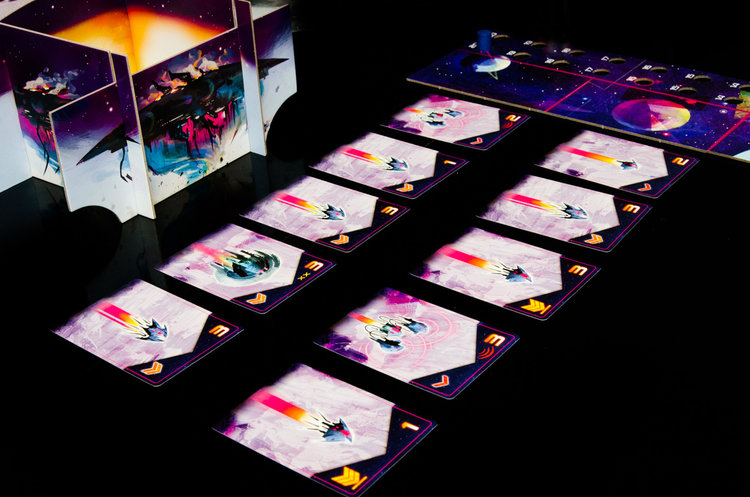 The best dexterity games realize this. Zoo Ball for instance is a frivolous tune of animal sport. You have a team of critters and need to flick your disc across the playmat and into a goal. It would be the national sport of Zootopia if such a thing existed.

Zoo Ball is shock and awe. It elevates the tension by upping its stakes. A single goal and the game is won, over, finite. Without intention, half the game is spent tight jawed with inflated lungs.

There’s no “nice” in Zoo Ball, there’s just “screw you and your giraffe.”

Another of the same cloth is Mars Open: Tabletop Golf. This brilliant title has you flicking oddly shaped cardboard balls into a hole. The rules are pretty much golf straight up, there’s even sand traps and chip shots. The explosion of making a difficult shot is unparalleled. Flip Ships is just sitting idly by on the shelf, eyeballing you hard.

Catacombs faces a similar dilemma. This is a lengthier dexterity game, a nearly two hour dungeon crawl where the bulk of the group flicks their hero discs across the stone floor and a cruel villain responds with vile monsters. It’s pretty much Descent if the game was focused squarely on mirth instead of counting spaces for movement.

This game is lovely. While not overly heavy, it’s much more of an ordeal and a main event. There are many decks and quite a bit to organize; it takes a bit of a commitment. This is probably the games biggest issue as it can be challenging to plop down from its perch and actually play. However, when you take that step and give it a chance, it always delivers.

So how can a two hour game where you’re managing special abilities, treasure, and asymmetric roles keep up the intensity? It doesn’t need to.

Catacombs boasts many individual moments of intensity. Your palm will still bruise from an army of high-fives and calories will still be burned. But between those scattered moments of explosion is something else – legit immersion powered by strategy.

This is a much more involved game than Flip Ships and it seeks to engage on a somewhat more cerebral level. It shifts the tone from mindless hee-haw to contemplative maneuvering. The stakes are high because everything flows downhill. The game is one of attrition and profit as you tinker with builds and find cohesion.

Each subsequent room you encounter is a tactical puzzle. You must formulate a game-plan and work with the tools you have in order to triumph. The battle is one of continual brinksmanship and focus. The game finds texture and depth where Flip Ships succumbs to the void.

As it builds to a climax a carrot dangles before your eyes. The final confrontation is an intense meat grinder as you let loose with everything you have. Regardless of the outcome, satisfaction is imparted.

This resides in the same class as the unique 4X dexterity game Ascending Empires. Both seek fulfilling meal-sized offerings buoyed by energetic flicking. They stand apart from the typical fare and dig into your brain refusing release.

Flip Ships on the other hand seeks the mean. It desires intensity but casts the thrills out like a fist of crumbs upon the floor.

← War, What is it Good for? A Dawn of Peacemakers Review
The Devil’s Lite Brite – A Hellapagos Review →