Of course, not really.

Hellapagos’ version of the haymaker is giving Jim the finger and putting a bullet in his body so everyone else can eat. Don’t cry for Jim.

This thing is mean. It’s sort of Survivor the board game where everything’s abstracted to a very discrete set of actions. The routine of play is overshadowed by high stakes voting that results in offing one or more participants at the table.

Yes, as play goes on you will fill the mass grave. And it will feel good. There are only so many resources to go around and less mouths to feed means it’s more likely for you to build a raft and make it off this cursed rock. So shut up and die already.

The klaxons are likely going off and you’re wondering who would play this? Well, I haven’t yet mentioned that it’s only 10 minutes. 10 minutes of laughter, backstabbing, and constant discussion. It feels like you came out of a shrink’s office by the end of it, although this will cost substantially less and is probably more therapeutic since you get to kill your buds. It’s a half-dozen birds and one stone type of thing.

So let’s break it down.

Each round your group will consume one unit of food and water per player. This is the driving force that dictates action and sways conversation.

On your turn you can perform one action. You can gather between 1-3 fish by drawing a random ball from a bag, a bag that’s all fancy and burlap by the way. You can amass water, the amount determined by the weather card from the round. Of more long-term importance is the ability to gather wood. This is used to build rafts, allowing people to eventually escape and win the game, but there’s an element of push your luck as you draw from that burlap sack any number of spheres, just don’t draw the black one or you’re bitten by a snake and poisoned.

The final action is one of selfish disregard for the group. It’s also the most exciting.

You may draw a card from this large deck full of all kinds of nonsense. Some of it is literally junk, others like the club allow you to hold more sway in the voting. You can find food, water, and the highly sought after bullets and gun.

You can’t do it all. Supplies will run out faster than you can gather them over time. It’s about hanging on, sneaking in a selfish play here or there, and white-knuckling your way aboard a raft when the hurricane comes.

Hellapagos does many things right. Of particular prominence is a mastery of incentives. It gives you a burly shove towards base instincts of survival, forcing you to commit to your new Lord of the Flies life-style or eat dirt, decaying on a forgotten island for the rest of your cellular life.

The trick here is that the burden of tough decisions are placed on the group as a whole. It distills to its very essence ethics and preservation. This all occurs in a very immersive group dynamic that in many ways mimics societal behavior. It’s believable and authentic, yet it’s all wrapped in cartoons and 10 minutes of screwage that belies the serious nature of what’s occurring. In this way it feels a bit more experimental and loose, as if anything can happen.

The power structure of the narrative supports this philosophy. Many of the shipwreck cards you draw are outright more impactful than other actions. But they’re an aggressive move that sends a message, one you attempt to throw some sand atop of and bury so no one notices.

Back to those incentives.

The cleverest mechanism in this game is found in the resource vote. When that Werewolf-esque posture is assumed, fingers pointed to the skies like revolvers waiting to be loosed, everyone’s on edge. In the blink of an eye someone is  buzzard fodder. There is an alternative: You can hoard water and food cards in your hand to avert disaster. By allowing you to shield yourself momentarily from sacrifice, Hellapagos emphasizes the needs of the individual over that of the group.

It’s simple math. If you draw a water bottle card you can play it and add a single resource to the pool. Great, that saves a soul, but if you’re playing the odds it’s likely some other gnarly smelling hostile at the table is the one that’s departing so you may as well hoard it.

Even better, if you’re voted to perish you can pull a hard “nope” by brandishing a firearm and lighting up another sucker. That mangy derelict will satisfy the vote and you get to steal all of their cards. Life’s swell when you’re holding the 45 caliber stick.

The constant social manipulating adds further tumult. You can play cards to help others, possibly gaining their trust. You can form temporary pacts, requesting bullets from others and promising to bust a cap in Terry for being a ninny and not helping the group. Often this will back-fire and the person you give ammo to will ultimately betray you. As power shifts and friendship fades, everyone’s left clutching for debris and trying to stay afloat.

Hellapagos is fantastic. It’s incredibly short but incredibly vibrant. It allows you to lower your shield and reveal your inner bastard while no one’s the wiser. It’s only 10 minutes after all.

The greatest weakness of the design is that it can crumble or fly based on player buy-in and attitude. It’s incredibly flimsy and a bore when played with the wrong group, devolving to a bog-standard coop where everyone ends up dying because there’s simply not enough resources to go around. Don’t play with fuddies and you’ll avoid this catastrophe.

Of lesser impact is the floppy nature of game length. Occasionally it can stretch to 20 minutes or so (particularly if there’s much debate), and being murdered early can certainly prove a bit weary. Observing play is quite fun though as you get to detach yourself from the spider’s web and watch the fly get devoured. 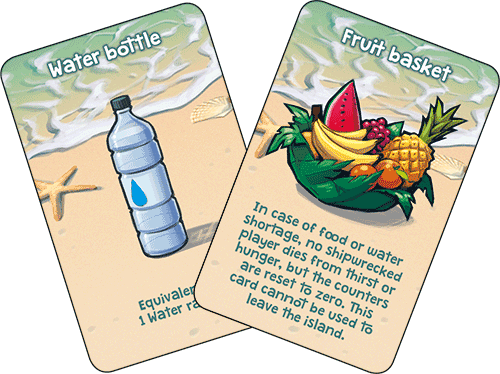 Despite the short time period some may also take umbrage with the swift reversals. I don’t believe a game can be too dramatic but I’m sure some of you may disagree. You can be sailing along smooth for the majority of play and make it to the end, only for your ally to turn on you and leave you behind.

The number of winners will vary and often it will be no one. Occasionally this will be caused by extremely poor luck. In one recent play we had three early rounds of zero water due to bright, sunny weather. As expected, it led to much bloodshed and crooked shenanigans. Such is the life of a prick.

Hellapagos works surprisingly well at most player counts. It’s certainly a stronger, more chaotic experience with a larger group, but a small cluster of four or five will give a taste of the mechanisms and end in suitable misery. No matter the inputs it reliably achieves dynamic story-telling with outrageous outcomes.

Hellapagos is special as it hits broader notes common in these types of social games while keeping it real and abbreviated. The dynamics at play remind me most of Cosmic Encounter, offering a bit of the wild-eyed cutthroat sip with only a miser’s rule-set. The bite-sized snarl may not hit the highest of highs, but it certainly is worth pulling out in a larger group. The only danger is that this little attraction becomes the main event.

If you take a step back and really take a wide view of what’s occurring, it’s pretty outrageous. Without concession or conviction, a fiend is shoving pegs into a paper-thin surface, creating a slapdash kaleidoscope of barbarism. It’s really something to behold.

← Side-By-Side: Flip Ships and Catacombs
Responsibility and Empathy in Times of War →

6 comments for “The Devil’s Lite Brite – A Hellapagos Review”