Shifting Realms is underrated. Designed by Craig and Jeff Van Ness, this Soaring Rhino title is a somewhat light weight Euro-style design of gathering resources and turning those resources into buildings, albeit with a pretty significant twist; the board is comprised of three randomized realms each boasting unique rules, player driven story events, and their own suite of buildings and combos. This change-up takes a kind of mellow core and turns it into something unpredictable and exciting. It has a real exploratory feel to the proceedings and experiencing a new realm combination pushes you to adapt and reconsider.

Darkness Revealed is the upcoming expansion which seeks to crank things up a notch. Included are two new realms which push the complexity of the design just a tad, while offering more interaction and tools to thwart your opposition. The Demon realm is just mean. 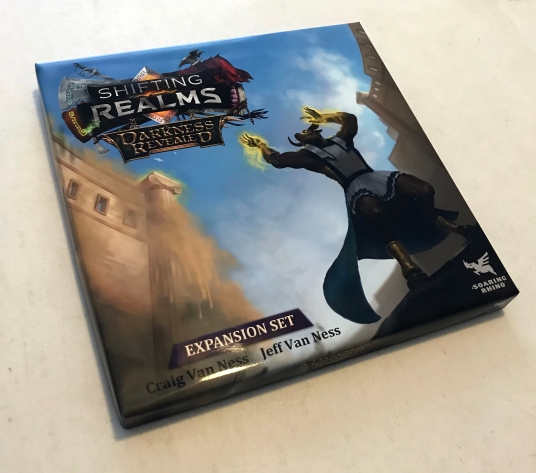 Let’s talk about being mean. This game already features a very punitive eye-for-an-eye combat system where players each lose pieces, but the Gehenna board pushes that a step further. Here players can construct Dark Towers which lure nearby pieces into their corrupting halls. You essentially capture opponents occupying the realm, forcing them to worship at your concrete edifice of pain. And you get victory points for it.

This feels awesome. Not just when you’re sucking in nearby dudes to gain the reward yourself, but sitting on the sidelines and watching Timmy lose another Scout to the black hole of demonic televangelism. You can construct a particularly nasty combo here which even allows you to pull in new members of the congregation from other player’s supply. Poor Jim, that soldier sitting peacefully next to your ballooning pile of resources who you probably shouldn’t have given a name, he’s now pulled through the void and squatting at the black altar.

The realm creates instant animosity. The native effect of the temple means you really need to decide fast whether you’re going to compete for ground in Gehenna or abandon the board completely. It’s literally divisive and pushes players into separate strategic vectors. In this way, it offers one of the most unique experiences of the game.

Yet Knossus will not be outdone. This is the more complex and perhaps interesting of the new additions. Here you will slowly construct a maze in the land of the Minotaur by placing walls and sub-dividing the land. Action is pushed in a hurry by players drafting from the story deck at the start of play, further pushing the norms of the design space.

This initial bounty of cards means players will possess a solid amount of actions early in the game. You can get those walls going, amass precious resources, or even deploy all without spending your precious actions each turn.

Dovetailing nicely with the expanding sections of walls are the exploration tokens. Knossus begins with each grass space occupied by a little tile. You can spend two magic cubes from an adjacent space and claim the tile, gaining victory points and an additional resource mix. This works as a pretty clear incentive to move about the land and contend with the weird geometric boundaries. It also supports the quirky personality of the realm.

As you push around from space to space it can feel as though you’re getting somewhat isolated and trapped down winding corridors, which is excellent. You can’t be completely walled off, but you can be deterred and it will affect how you plan and execute your actions. That’s exactly what I want from such a labyrinthine mechanism.

The buildings here are secondary to those other features, but they’re still pretty compelling. The standout is the expensive structure which offers a massive 10 victory points, but I also have a soft spot for the junction which allows you to siphon material from adjacent resource spaces.

Shifting Realms is not the type of game which will blow your mind, but it is a very smooth game that blends unique Euro mechanisms with legitimate thematic elements. It’s a better game with Darkness Revealed as the combinatorial nature of the board is more fully realized with increased complexity. These new areas don’t completely overshadow the base selection, but they support the experience in a unique way, further cementing the core concept.

If Shifting Realms did not excite you before, this expansion won’t likely change your opinion. However, if the game’s been sitting on the shelf and gathering a bit of dust, this may be the exact thing to snap it back to life and regain your focus.

← So Say We All – A Menace Among Us Review
Die Atombombe: The Reich’s Bid to Build the Bomb →