Is it morally reprehensible to play a game which explores the Third Reich’s efforts to build the atomic bomb? Should slipping into the role of a Nazi scientist cause revulsion? Do I have any right to ask the others at my table to play such a thing?

These are some of the tough questions which addled my mind after discovering Die Atombombe. You can’t ignore these issues and talk about this game. Despite grappling with this for many hours, losing sleep and peace, I still don’t have an answer. Yet we did play it and I am writing about it.

I really like weird and quirky designs that offer something you can’t find on the sagging shelves of your local game store. Cave Evil, Dungeon Degenerates, and Shadows of Malice come to mind.

Die Atombombe is such a game. It’s also one that may make you hate yourself.

This is a little game that’s not really so little. Against the Odds is a wargaming magazine and has released this oddball card game as part of its commemorative 50th issue. As you’d expect, the component quality isn’t going to match the latest Asmodee or Stonemaier title, but this format does have its advantages.

One of its greatest strengths is context. There are dozens of pages delving into the author’s research on the subject and how this came about. It explores the moral issues surrounding the game as well as the political and scientific failings of Adolf Hitler’s regime. This is a product of well-executed theme as it acutely portrays the in-fighting and limitations of the Uranverein. Make no mistake – Germany’s efforts to develop a weapon of mass destruction were messy, and Die Atombombe is messy.

I note this as a positive. The mechanisms themselves are clean and simple. It’s a tableau builder where you acquire resources and mines and scientists, stockpiling bonuses that you eventually tap to make a large die roll and hopefully progress along the atomic science advancement track. Each level requires specific symbols and a target number you must beat on your roll. This leads to an arc of play which consists of a mad grab for assets followed by swift progression. 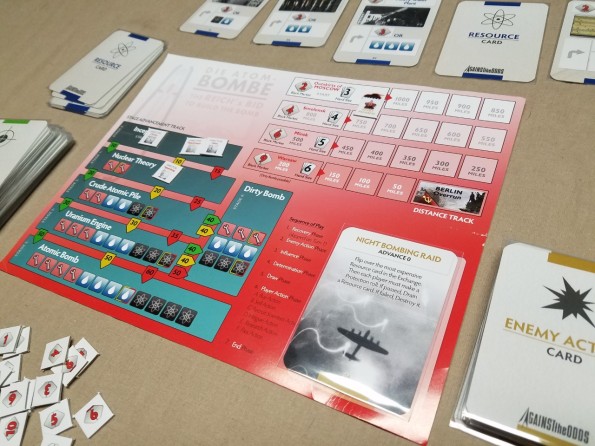 The wrench is that it’s very easy to throw up red tape and thwart your fellow scientists. You can invest influence to subtract dice from opponent’s pools and you can play events to weaken their institute’s support. Scientists can be drafted into war or even stolen with lucrative offers. It’s part Euro-style tableau builder and part swingy Ameritrash brawl. There’s certainly potential for animosity.

But there’s also opportunity for alliance. Players can support each other’s efforts by offering resources and boosting odds. This is often a tough sell and sabotage is much more common, but to progress into the upper echelon of atomic research you will likely need help.

Clouding the waters are hidden allegiances and obfuscated objectives. Ben may receive his highest point gain from developing a Uranium Engine as he’s secretly working for the German Post Office, his goals aligned with furthering science as opposed to supporting warfare. On the other side of the table is Marcus who is being backed by the SS and must reach the level of an atomic or dirty bomb to earn any victory points.

This is one of Die Atombombe’s most interesting elements, leaning into hidden goals while pushing players towards negotiation and discussion. It’s precisely how the game achieves its intent and skillfully imprints those thematic elements into its myriad cards.

All of this is supported with mounting tension. The game progresses rapidly with the Soviet march on Berlin being tracked each round. There’s a bit of a race as proceedings will immediately end when the Russians sack the capital or when a player develops an atomic weapon. You can instead reach for a dirty bomb when things are most desperate and the enemy is on the doorstep.

It’s easy to sort of get sucked into the historical elements and ignore what’s really going on. There is a strong sense of technological progression and a shifting political environment, but it’s easy to push that Swastika casting a shadow over everything out of your mind. Part of me finds that appalling and part of me wants to push that heavy feeling into the closet and shutter it away.

When recently asked about her grueling portrayal of mental instability and terror in the film Hereditary, Toni Collette responded: “It’s just a movie.”

Is Die Atombombe “just a game”? Do I want my five year old daughter to see us playing such a thing?

This is not easy in any sense of the word. It’s difficult to ascertain the intent. There are moments where I feel this is all fine, particularly when exploring “The Good German”. This is the most dramatic element, a card which explains that your allegiance is not at all to the Reich but instead to some sense of altruism or purely science. If you are lucky enough to draw this card you can hang your hat on this moral “out”, but again, nothing is easy.

If the Soviets do make it to Berlin before an atomic weapon is built then the player holding the Good German wins outright. The catch is that if someone steals this card from your hand they can choose to persecute and turn you into the government. This is devastating as it wipes your tableau and guts your engine. As a dramatic mechanism this is fantastic and provides an ultimate lever to push your luck.

You can take this in two directions. The first is that this is a significant aspect of the game and further heightens the underlying tension. The second is that this is a token effort to alleviate the moral burden of the design. The truth is that it’s a little of both.

One aspect of the Good German that’s easy to overlook is the role of the persecutor. Of course that person can always just keep the card and close their mouth – you’re never allowed to discuss this information openly so the previous holder can’t just alert the table – but that’s supremely risky. The problem here is that the decision to be a loyal Nazi is not made from a standpoint of morality, theme, or setting. It’s made purely from a mechanical angle in assessing the probability of the war ending prior to atomic discovery.

This occurs because no one will engage the theme. It’s too much to ask. I don’t want to even broach virtuous play as a Nazi scientist because I can’t consider myself in that role. I believe a reasonable human being can’t reconcile this decision point with any ethical consideration.

It’s a completely different ask than playing the Germans in a wargame. In something like Combat Commander it’s a more personal intersection where you’re grappling with fundamental concepts of war and valor. Despite the fact that war is inherently political, a strategic or tactical wargame doesn’t require the participant engage in politics or moral culpability.

Die Atombombe is entirely political. You’re asked to partake in a race where the finish line is the death of righteousness. There’s an inherent weight you can choose to ignore but in doing so the underlying themes are wholly irrelevant. By so precisely capturing its theme, Die Atombombe keeps its distance. It exists in a space of contradiction. This is a conundrum you have to square if you want to find anything meaningful in play, and I reckon most won’t be able to do that.

A review copy was provided by the publisher. If Die Atombombe looks like something you want to explore, you can pick it up directly from the publisher at Against the Odds.

← An Early Look at Shifting Realms: Darkness Revealed
Just Outside the Shadow of the Colossus – A Skulk Hollow Review →