Combat Commander is 13 years old. That’s absurd when you think about it.

I’m the dude showing up at three in the morning, slightly drunk with bottle in hand and ready to throw down like it’s 1999. Surprisingly, the party is still raging and being late is just as good as being on time.

That’s a very complicated way to say that this game is still relevant, and damn excellent.

Chad Jensen’s classic feels as fresh in 2019 as it did in 2006. This is a company level simulation of infantry combat whose innovative take on the card-driven game (CDG) is evocative and shiny.

“But it doesn’t have tanks!” shouts a tall man in the back of the room.

I hear you Mr. Eickert and I don’t care.

What makes Combat Commander so compelling is its philosophy on combining simulation with moments of pure cinema. This feels like a proper wargame with an emphasis on fire groups, command, and leveraging terrain and troop quality. Yet it never lets those elements of verisimilitude dictate the tempo of play. Story is not sacrificed in the name of realism, rather, the two intermingle like lovers shut away on honeymoon.

This is Combat Commander: Steel, blood, and sex.

T-Swift is telling me to calm down and I ought to listen. 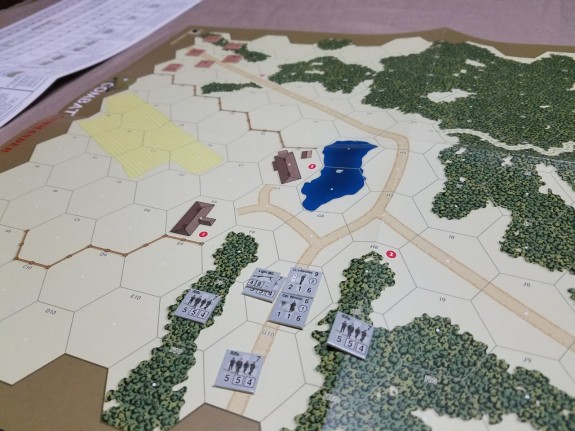 But let’s get at it. The true magic of this design is in the fate decks. Each nation has their own mixture of cards which players draw and subsequently play to execute orders. You can’t move or fire unless you have one of those cards in your hand. Hence the classification as CDG.

This does many things. First, it provides a wonderful fog of war. I don’t know what’s in your dirty Rusky mitts. If I make a break out of the treeline will you toss out that OpFire card and mow my poor men down? Maybe you don’t have a fire card at all and I can safely seize the opportunity to push the right flank. This is excellent because it’s dramatic and in turn cinematic.

When you fire at an opponent you draw the top card of your fate deck and refer to a dice result on the bottom corner. The result of your action is really secondary to the mechanisms effectiveness, as its true accomplishment is in parceling out more helpings of that drama. Events will trigger, sniper fire will pierce bocage, and your Maschinengewehr 42 will jam. This is how those quirky little hero counters are brought into play, how traps are sprung, and how random outbursts of artillery and carnage are sown. It’s exciting and every turn of the cards brings you right up to that edge.

This is a simple mechanism really. Instead of dice you use cards – which are efficiently multi-use asymmetrical decks in this case – and baked in are random outcomes of narrative significance. The real treat is in how this combines with those simulative wargame elements, and particularly your strategic thought process, to produce such a sublime combination of chaos and control. It’s one of those moments where the experience of play is elevated beyond the sum of its parts and magic occurs.

Now you in the back of the room, yes you, perhaps you don’t feel that magic. Maybe you just get frustrated that it’s been three turns in a row where you didn’t draw that desperately needed fire card. The fact that this simulates battlefield confusion and a breakdown in communication or morale is irrelevant when you’re angry. Well, then this one’s not for you and that’s fine.

A further criticism is that command and control is not modeled in any realistic fashion here. The design rewards you for composing fire groups with leaders, but it rarely steps beyond that convention to accurately portray morale. There’s not a sophisticated system of suppression and trauma is modeled simply. Those who are steeped in small unit tactics may find themselves wanting for their library of ASL modules.

This is theater, not lecture.

For those who can get along with this cracking cardboard version of battlefield cinema, you will find a truly massive game. U.S., Soviet, and German forces are all represented with many units and counters. There’s a bevy of card-stock maps which do not need to be fished through and combined in order to get down to this war business.

The rule and playbook are unequivocally clear, certainly honed from multiple printings. And yes, there are dozens of expansions that add and twist your experience, although absolutely none are needed. Once you’ve finished with the included setups you will find the single best random scenario generator I’ve ever seen. It’s not hyperbole if it’s fact.

I do wish I could sit down and bang a play out in a more concise time. Nearly every scenario will take two or three hours and it’s a bit of a mental investment. I will say that in my abbreviated experience with this game I have never regretted setting aside the time.

This is a brilliant work that proves story-focused gaming is not some new trend or concept, but it was there all along. Few titles in this genre possess such vigor and youth, particularly for an elder long in the tooth.

← Just Outside the Shadow of the Colossus – A Skulk Hollow Review
From Cavern to Manor – A Vast: The Mysterious Manor Review →