I remember Vast. It was 2016. My buddy Aaron comes up to me in Hall D at the Indianapolis convention center and starts speaking gibberish. His eyes are wild and he’s describing this game from some company called Leder. On the outside I was cautiously nodding but on the inside I was wondering, “What kind of a name was ‘Leder’?”

Then we played Vast: The Crystal Caverns. Well, we tried to. Aaron can get excited and he found two random con-goers to sit down and commit their souls to this really weird but exciting dungeon crawl. This was a mistake.

Fumbling through the rules was like cutting through Cambodian jungle with a spoon – one made of plastic not even metal. Some of the rules were in the booklet, others were parceled out among player boards. The goblin player in particularly struggled and ceasing play repeatedly to help them felt like we were partaking in board game stop motion.

It wasn’t all bad. I got to be a cave after all. It was my dungeon and this stupid thief, aloof dragon, and caffeinated goblins needed to extricate their meat-bags pronto.

We ended up playing several times over the course of that weekend. Each time we switched roles and it was like playing an entirely different game. Yes, I do mean in that wonderful asymmetric sense where your mechanisms are entirely different from the person next to you, but I also mean in that completely awful sense of having to re-learn a very complicated system over and over again.

It was simultaneously brilliant and dreadful. Stuck in my head was the notion that this was more a demo tape than a studio LP. I wrote about it at Geek & Sundry and we never played it again.

Then Cole Wehrle came along. He produced one of the best games of the decade in John Company. He helped Leder establish their identity with the massively successful Root. And then he slapped me all over again with 2019’s best Pax Pamir. This dude’s a hit machine like The Beatles or Stones.

So when I heard he was the lead developer on the next iteration of Vast, The Mysterious Manor, I was all in. Cole hasn’t let me down.

This isn’t to diminish Patrick Leder’s position as creator. Vast: The Crystal Caverns was the foundation for Root, Mysterious Manor, and Leder games as an entity. Patrick has done a monumental job here.

It’s still Vast. Asymmetry is the primary identity as each player crawls into a dungeon as either a shapeshifting spider, sheepish warlock, impervious Paladin, a cohort of skeletons, or even the structure itself. Here the building is above ground and a manor which feeds into the slightly spooky theme.

Don’t let that fool you. This remains kind of a dungeon crawl and kind of a skirmish game, one that’s heavily influenced by the asymmetric designs of yesterday such as Dune and Cosmic Encounter. Everyone operates by their own set of rules which interact with the core mechanisms in twisted and interesting ways.

That core system is simple. The rules describe how to explore the manor, how spaces work, the deterministic combat, and how you generally interact with tokens. Each separate role is given a page of their own rules as well as a page of examples. It does appear confusing at first and some clarity comes when reading each of the faction’s player boards. Some more arrives when finding FAQs on Board Game Geek.

There’s this interesting feeling that you’re playing a dungeon crawl and alternating between the role of player and overlord. At times you’re pursuing your own agenda and furthering your goals, and at others you’re spending entire turns thwarting whoever is outpacing you. Sometimes you’ll negotiate and try to convince the skeletons to take a bite out of the spider’s abdomen. Sometimes they’ll actually listen. It’s odd but strangely engaging. 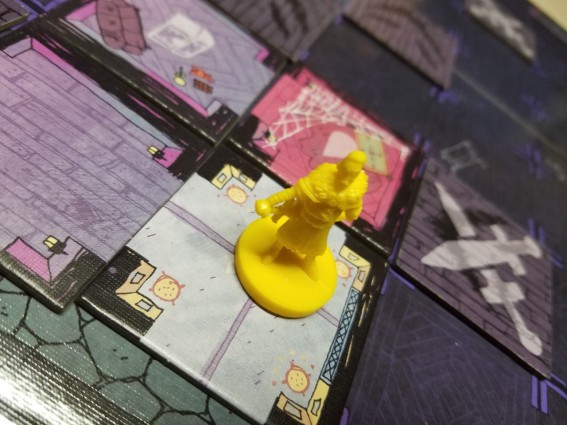 This absolutely is easier to internalize than its predecessor. There appears to have been much work on streamlining exceptions, focusing interactions, and most importantly, presenting information in a more logical and coherent manner.

The player boards are excellent. You don’t have to spend a good ten minutes reading a hunk of cardboard and mentally puzzling over how exactly it all works. Each walks you through your turn in order, presenting new concepts in logical and straightforward ways.

The most significant achievement is in decentralizing the load. You’re given an extra reference sheet for your character offering advice as well as clarification. Many of the roles have their most intricate maneuvers offloaded onto cards that you gain and become aware of over time.

So take the skeletons for instance. The Crystal Caverns would likely have listed each of the skeletons abilities as special rules on the player board, tossing a crackling skillet of Hamburger Helper into your mouth and eradicating your taste buds as well as your brain.

The Mysterious Manor places the special attributes on cards and furthermore parcels them onto equipment that you gain slowly over the course of the game.

The Paladin works the same way. His variable powers are gained over time as you accumulate grit and explore the dungeon. The spider is perhaps the most complicated, able to shapeshift into three different forms each with their own rules. But even there you have separate boards and can choose to ignore your alternate forms until your beak is wet.

There’s a general tone of refinement that extends beyond the components and into the roles. The board state is more clear and easily read. The strategic interactions and tactical challenges manage to feel simultaneously tight like a Euro-style design as well as chaotic and open-ended like the best Ameritrash. This is afforded by trust in the player, allowing great creativity to combo abilities and interactions and take the design by the reigns, even if momentarily. That feeling is absolutely magnificent and it grabs a hold of your bones.

Manor is still not a simple thing to learn, despite being easier. It still is a demanding game that warrants many many plays. But it rewards your exploration with an endless tunnel and continual warmth. Some of the roles won’t suit you and some of the rules will perplex at first, but perseverance is doubly rewarded.

So what is this work trying to say, if anything? It comes across as a criticism of newer designs that include variable player powers as window dressing. A small tweak here and a slight adjustment there. Including this concept of uniqueness appears mandatory in the current school of thought, and it’s all surface.

More importantly, each set of sub-systems envelopes the thematic tones of their owner. You feel a (small) army of skeletons scurrying about in jerky motion and bloodlust. You are a crooked house, haunted beyond measure, intent on performing dark ritual and throwing the invaders into darkness. Evoking such colorful trappings through gameplay, particularly that full of interaction, is a wild beast to tame. Leder and Wehrle and all of those others who stuck a thumb or eye into the cauldron have pulled it off.

2 comments for “From Cavern to Manor – A Vast: The Mysterious Manor Review”