I’m kind of befuddled. This one is pulling me every which way and I don’t know where I’ll land. In such cases I start writing and we find out together. So let’s start writing.

Mental Blocks is a stellar concept. Similar to the forgotten La Boca, participants stare at a spatial puzzle of different colored blocks assembled in various configurations. This is fully cooperative however, and each player is given a card linked to the same challenge.

It’s a bit difficult to conceptualize. Imagine a tower built of rectangles, triangles and squares. A person on the North side may see a triangle sloping down towards the East in one particular section, while another person standing on the Western view will see the back of that triangular block as a square shape. Combine colors and multiple layers and each player’s perspective around the vertical structure is unique. Each particular view is also inherently necessary to nail the correct configuration and find the solution.

Now, add a 10 minute timer. And maybe a traitor.

I dig these cooperative puzzles because they ultimately boil down to a core set of principles – communication and understanding. The game is really an exercise on different worldviews and finding the intersection of individual context. It’s a metaphor for some of our fundamental issues of humanity as we struggle to find common ground. This is pretty powerful if you take a moment to think about it. 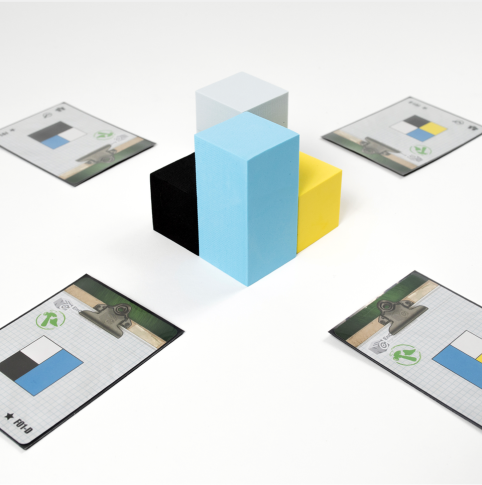 And if that was all we were looking for then this would be sterling. Unfortunately, I’m not sure Mental Blocks has the longevity to prove more than a curiosity. After a pile of plays I’ve certainly enjoyed my time with it, but I’m also not eager to step back on the ol’ geometry train.

Let’s discuss the traitor and perhaps you will understand my particular viewpoint.

The traitor is a neat idea. When I first heard of this mode my ears perked up a bit and I gave Mental Blocks a harder look. I was jazzed.

Then I analyzed this functionality and concluded it was flawed. I assembled a group to prove my hypothesis and, well, I was validated. Here’s the deal: a traitor needs somewhere to hide. In The Resistance you are camouflaged by larger groups of voters with rebels attempting to ferret you out by overlapping result sets and voting patterns. It’s imprecise and requires a bit of a data combined with intuition. It works.

In Mental Blocks you’re left a sliver of shade by a dying shrub in the middle of the desert. And you’re naked with sand wedged between every crevice.

When the timer starts and the games begin, we start talking. If I’m not the traitor I can immediately ask “who has a colored card?”

There are four such cards in every single puzzle. They each offer a different perspective of the squared structure and are the baseline to find the solution. You’re not allowed to show your card but you can discuss virtually everything on it. So now either four people raise their hands, or maybe five if the traitor is feeling cheeky.

If it’s only four, great, now we can simply ignore everyone else playing. The perspective cards beyond the base four offer a gray isometric view of the structure, each slightly different. You don’t actually need that information to solve the puzzle and it’s merely an additional data point which could help. So ignore them all and the game kind of falls apart as an activity dedicated to enjoyment.

Now, the traitor could pretend to have one of the colored perspectives. Their card does show the colors of the structure but also from two separate isometric views so they can effectively see the entire solution. In fact, the traitor card is used as the key at game’s end to determine if the blocks have been assembled correctly.

If the traitor pretends to have a colored perspective then of course you simply narrow it down further: “So what does everyone see in the bottom right of their image?”

This puts the traitor in an immediate bind. They need to look at their oddly distorted image which is presented differently than everyone else’s and quickly come up with something to claim. Likely they will then be paired with a legitimate player and we have the traitor narrowed down to two people.

It’s simply not robust enough to stand up to scrutiny in a group experienced with these types of games. You may be lucky enough to partake in a traitorous session or two where this level of effort is not applied (hey, sue me for being analytical), but eventually someone will find these cracks and wedge them apart.

Now, the traitor mode is completely optional and could have been left out of the game with no issue.  It’s also not presented as the standard mode of play and it’s unfair to ding the design much for its failure. So we must keep that in mind. 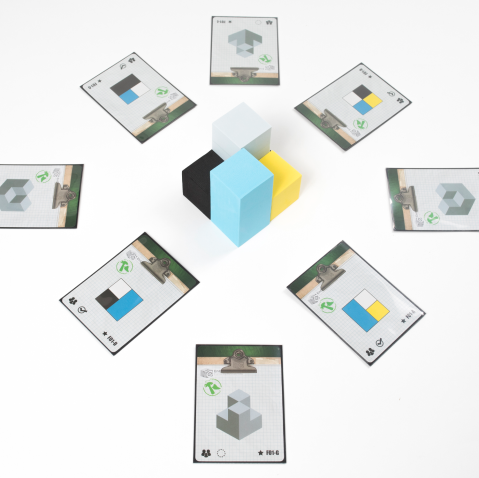 However, this variant does highlight a fundamental aspect of the design that i’m not particularly enamored with. Each puzzle is given the same foundational solution cards regardless of player count. You always include cards A-D, with additional players simply receiving unnecessary isometric views. Effectively everyone is slotted into a role with some being superfluous and others integral.

Those additional players can contribute, but it feels as though a beat was missed here. Finding an alternative method may have been a consideration although developing such a method while minimizing components and complexity may be futile within the confines of the design space.

Because roles are consistent the challenge of the game comes down to isolating each other into our prospective views as quick as possible and then combining and double-checking our work. It can feel frenetic as composure gets away from the group and shouting ensues. It’s like a board room meeting where you’re all chugging beer and dressed to the 0s with Kid Rock blaring on the PA. Finding your way amid this chaos provides the sweetest moments. It’s simply unfortunate that skilled communicators can so quickly mount the hurdles.

I have played this with three different groups and the two collections of experienced hobbyists absolutely crushed this game. We’ve never failed and have easily tackled the highest difficulty puzzles with multiple minutes to spare.

The design does offer hindrances such as allowing a player to only touch triangles or even blocking your speech. These are lovely and enhance the game in humorous ways, but they’re easily maneuvered around.

There’s also a series of global restrictions such as players being unable to move around the table. These ramp up the difficulty severely and make a game of it, although they also provide a pervasive sense of annoyance at times. For instance ones that swap the colors of blocks can be quite the mental hurdle and really enhance the cognitive load. Sadly, it often feels as though these are tacked on and detract from the game’s core themes, even undermining the joy by pushing moments of quiet mental analysis to eat up the clock. Many of these options don’t enhance the puzzle in a meaningful way, rather expanding the difficulty by providing gotcha moments and sucking the air from your lungs.

The best experiences of this quirky design come with a group not particularly adept. When everyone’s struggling to quickly communicate their little information slice it can get hairy in a fantastically tense way. These plays are the most invigorating as Mental Blocks’ vision feels fully realized and you’re no longer beating on the framework or wrestling to jump through clunky restriction hoops.

Interestingly enough, some investigative reporting elucidated that many find this game difficult. Perhaps you will be so lucky. For us, this reminded me of Mask of Anubis in that we were enamored with the core concept but quickly found the magic wane due to accomplishment.

The central thematic element of empathy and recognition is strong enough to carry it on its own – at least initially. Despite not seeing a long-term relationship with this work, I’m ultimately thankful for our time together.

The core of Mental Blocks is clever and singular. I’ve compared it to La Boca but even that spatial design is nothing more than a a third cousin twice removed. Some of you may find the challenges one note and easily conquered but likely more will come to the conclusion that I’m a hack and spewing nonsense. You’re both likely right as it’s all a matter of perspective.

← From Cavern to Manor – A Vast: The Mysterious Manor Review
Of Simulation and Drudgery – A UBOOT: The Board Game Review →