I don’t understand fighting games. Yes, like every other child in the 90s I played my fair share of Street Fighter and Double Dragon, but I’ve never explored these at a high level. When one of my buds literally built a controller – a huge brick of a thing – I was stupefied. Fighting games to me have always been 30 seconds of mashing buttons and screaming at the top of my lungs (which is how I imagine coitus in the far future).

But Street Masters is a board game. One with miniatures and cards. Cards that offer clever tricks and the all-important combos. It’s about co-operatively squaring off against a boss and thrashing minions as if we’re in one of the most joyously tactile games of Streets of Rage ever experienced.

Board games I do understand and this is a crackerjack of a design.

This is the debut release from Blacklist Games but you’d never know it. Street Masters is a top-notch production that’s sound from cardboard to system. Even the rulebook was solid as a roundhouse and took my hand comfortably through the ensuing tabletop blood sport. Finally, the amount of content they’ve stuffed into this box is a bit overwhelming. 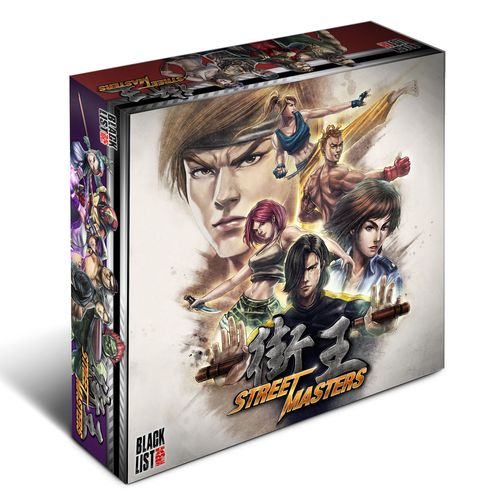 Combinatorial is the word of the day. There’s an obvious philosophy here to offer a slick fighting game experience that’s constructed from three distinct moving parts. The way these pieces intersect and manufacture a unique narrative playground is the conduit for our adventure.

The first component is your fighter. Whether you select the adept combo-machine Brandon or the nimble support specialist Natalaya, you’re hitting the ground with a unique selection of abilities. Each of the six protagonists possesses an asymmetrical deck of action cards that supports a playstyle all their own. There’s much to explore and a stunning amount of mechanical variety on offer. Strengths and weaknesses abound and specific groupings will yield varied results depending on the strategies pursued.

These asymmetrical fighter decks are the lifeblood of the design. They provide the arcade feel, nuanced strategy, and key decisions integral to play. What’s particularly fascinating is how each feels like a well-tailored CCG build. There are cards that feed into each other and combos to be discovered in every nook and cranny. They are each capable and worthy of a deep exploratory dive.

The only challenge here is blending the smooth card-play with a slightly obtuse action system. On your turn you receive a free movement, a card step, and an action. Your action will come from a card, and newcomers will sometimes conflate things and have a difficult time keeping the fragments of their turn in order. This is overcome with experience somewhat quickly.

The next element is the enemy. Each faction has their own pecking order of minions and insano boss. They’re run by a deck of cards which spawns new foes as well as placing abilities into play that modify their capabilities.

The Brotherhood, for instance, are led by a cold-blooded killer named Dmitri. You place the miniature on the board and immediately notice the huge RPG slung across his back (that’s rocket-propelled grenade, not a Gary Gygax publication). But looking over his card causes confusion at first glance as he only offers a melee attack against adjacent foes. It all comes together when the card is later turned revealing his heavy arms and your mouth contorts in anticipation of the pain. 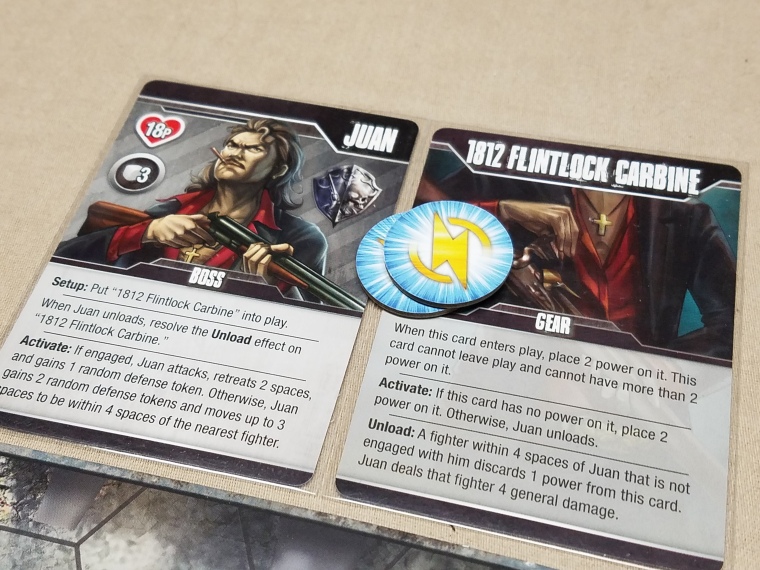 Another boss, Juan, wields a unique flintlock with supplementary rules.

This approach of revealing complexity and randomizing the current environment of special abilities is woven into the level. The map forms the last component of the three options and has a large bearing on play. Each board possesses a deck of events as well as a reference card with setup modification and special rules. Sometimes enemy thugs will be attempting to haul contraband off the playing field. Other duels will have neutral challengers pop up and confront the big bad. It’s all a little crazy and unpredictable in the best of ways.

These three sub-systems – characters/enemies/maps – are layered in a way that presents a fresh scenario engineered from a randomized set of modules. Gabriel and Ying Hua trading blood with The Cartel feels very different when the showdown happens on the “Gone Ballistic” map as opposed to “Sudden Death”. Similarly, keep the map and swap out the baddies and you have an entirely new experience.

And there goes the wind.

There’s an emotionally satisfying conclusion to assembling these disparate pieces. The game hits you with a thematic combo of hooks and you can almost see the points materializing above your dizzy head.

It helps that play is sharp as a Hadouken.

Each fighter’s deck is wonderfully crafted to build a specific experience. It will take multiple sessions to unleash their full capabilities and tease out each trick. This offers a fantastic feedback loop as you grow in capability with your understanding, feeling that immense power in those cards at the edge of your fingertips.

The dice system is a dapper fellow in its own right. You roll to randomize the outcome but no result is poor. If you don’t inflict damage then you’ll acquire defense tokens which are used to repel the opposition’s blows. Even that nuanced system is focused on empowering the player as tokens used for blocking are flipped to charge up your special move. 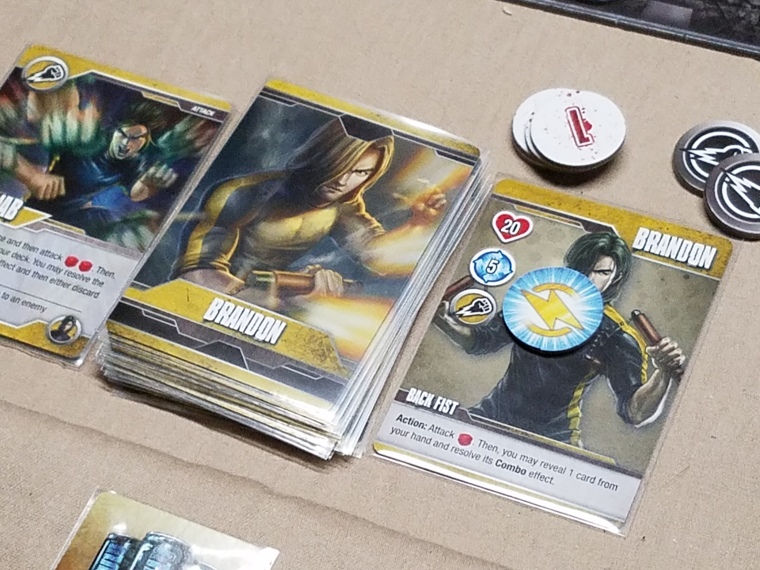 This philosophical approach of designing the heroes as capable combatants is refreshing. You don’t have prolonged bouts of emasculation as your fists land in open air and your confidence is crushed. Every single turn of momentum is forward as the game maintains velocity. It’s fascinating.

The final blow comes in the form of story mode. This is a light campaign option that links sessions with a narrative deck. You can choose between two options in the base game that form a background context to your individual fights.

Additionally, there are tailored story decks for each fighter. These provide narrative arcs for each protagonist to wrestle with over multiple scenarios. You will grow in strength as you add cards to your deck and deal with the tumbling outcomes of momentary decisions. It’s handled with a strong editorial touch as the main portion of the game does not come across as a mere appetizer, yet this additional content does not feel an afterthought or underdeveloped. 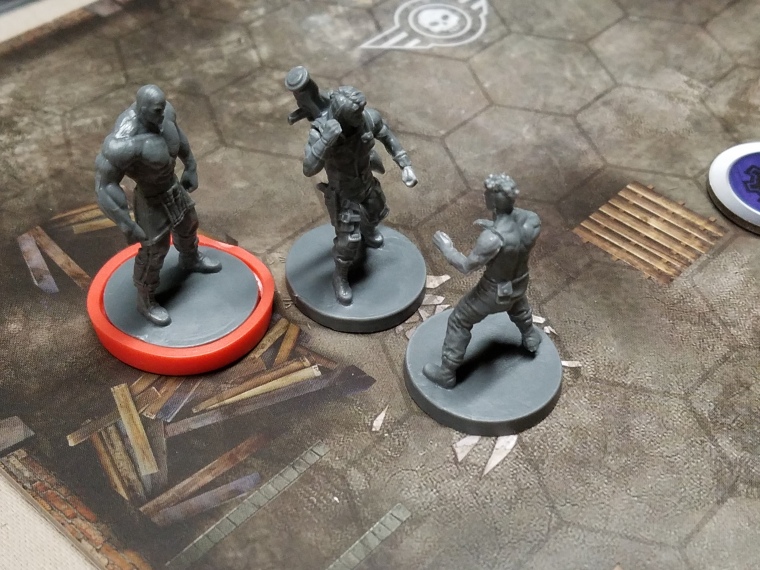 Yeah, I’m swooning and I have to reign it in. This game does have its challenges and odd twists. There is a lot of text to parse, not just in your hand but out on the table. Someone will need to step up to run the map and enemy deck, which can be daunting. When a boss’ capabilities and activations are spread amongst several cards it can be a bit of a twist. You’ll find yourself occasionally having to re-read an effect or ability to keep the process straight. It’s never horrendous or bloated, but it can be annoying or inconvenient.

This confluence of randomized plug-ins can also result in a chaotic tempo. Some plays will have the strongest enemy effects remain in the deck and others will have a swarm of foes at your throat due to a series of unfortunate circumstances. If everything turns your way you can spend a few minutes setting everything up and then finish off the boss in a brief affair. Thankfully the design is one that embraces challenge and more often than not you’re beaten down than handed the victory.

This unpredictability of the narrative is ultimately one of the most fascinating and frustrating aspects of Street Masters.

The game can also approach a nagging length at four players. While it never pushes beyond 90 minutes, you really want this crackdown to last 45-70. It does work quite well solo with no rule hitches or structural changes, the only caveat is that adding another player or two really opens up the ability to combo and support each other. The field becomes more dynamic and the strategy space widens. 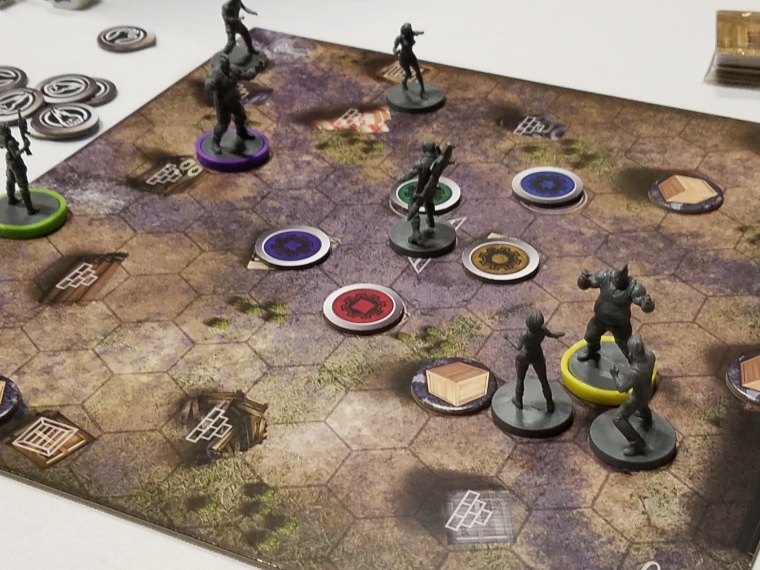 This is one svelte little badass. This design favorably compares to last year’s TMNT: Shadows of the Past. They’re both arcade beat ’em ups offering cooperation and variability. Street Masters is the smoother of the two, offering a more streamlined process and a little less fuss.

Ultimately this release comes across as though Brady and Adam Sadler designed a game for themselves. It doesn’t feel rushed or as if features were cut or added to tweak appeal. It appears crafted from the ground up as something acutely targeted at their own tastes and intended for extended play.

It’s not difficult to connect the dots and trace this game’s lineage from the dungeon crawlers of yore. The Sadlers clearly arrived at this point after years of work with FFG and hacking it in the Ameritrash arena. Perhaps a greater leap would be to flag this as their utmost accomplishment; a culmination of a decade of design. Legacy musings aside, Street Masters is here to shove a fist in our jaw and make its presence known.

13 comments for “An Ode to the Pavement- A Street Masters: Rise of the Kingdom Review”