One of the wonderful things about historical games is the process of learning that accompanies play. These games are fascinating tools to help increase cultural proficiency, better understand human nature, and re-shape our worldview. They challenge us in all the best of ways, both cognitively and emotionally; Pax Pamir perhaps doubly so.

This second edition of Cole Wehrle’s take on “The Great Game” is something special. It catches you immediately. That bold cover. The cloth map unfurled like an elegant Persian rug. Chunky blocks with depth and character that outshine the vast mounds of plastic currently dotting our tables and tomorrow our landfills. Colors abundant, saturating the table with rich splendor. 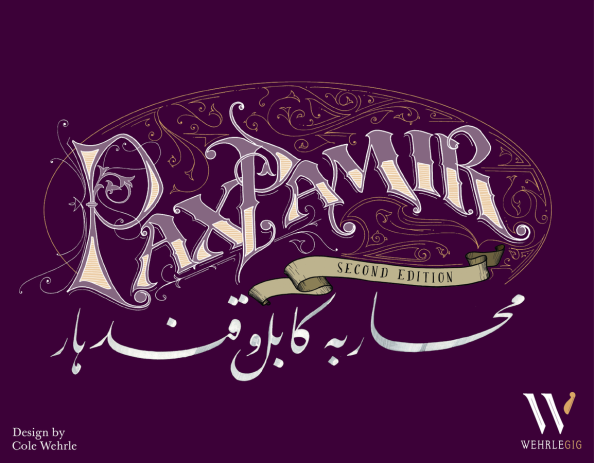 “The Great Game” may be something you know little of. That will change once you’ve spent a few turns in this facsimile world. The intense and frothing diplomatic collision between Britain and Russia over a chunk of people and land known as Afghanistan – it’s as gripping a setting as the mechanisms that are paired. You can get lost in the cards simply reading about Eldred Pottinger, a spy who helped lift the Persian siege at Herat or Hajj Mirza Aghasi who introduced his Shah to mysticism.

Soon you realize that this conflict is not yours. As an Afghan tribe looking to thrive in the wake of the fallen Durrani Empire, these foreign coalitions are oppressive intruders that must be placated in order to secure survival. As blocks are placed vertically in the scattered territories the earth begins to fill up, soldiers looming over the countryside like trees blotting out the sun. Your home slowly turns into a battleground and you’re caught in the battle.

Worry not, for some of those armies are native Afghan forces, standing erect and ready to wage war or remain motionless as duty calls. But those aren’t your people. They’re yet another tool to manipulate or be manipulated by. The rub is that all of these players are out for themselves. All you can do is nudge the whirring contraption in your direction and ride the situation like a hapless stooge atop a thrashing bull.

That control is acquired via cards. In the Pax Porfiriana tradition, two rows form a public market. Options slowly make their way left down the river and become cheaper over time. In the early going, your only two available actions will be to buy or play cards.

Everything is tight, from options to money, and everything you do feeds back into the game’s vicious loop. Coins spent to pick up a juicy Patriot are placed upon other options in the offer, eventually finding their way to opposing players, soon spent to fuel your demise and fight the great war at the heart of the Great Game.

These cards you buy will be placed into your tableau. As you play them they offer instant benefits such as placing faction troops or your own tribes on the map. They also afford new options for you to perform on each of your turns, such as taxing the land or purchasing gifts to tie yourself more closely to perhaps those Russians or Brits. Your options slowly expand and swell parallel to the game’s arc. It feels as though your base of power and influence grow with the erupting state of the board, everything approaching a powder keg set to expire.

This is also where the game’s greatest challenge appears. With such a large assortment of options to sift through, and a relatively chaotic turn-to-turn environment of those selections disappearing, it can take quite a bit of focus and decisiveness to keep things moving. Analysis paralysis is no foreigner to Afghanistan.

Nevertheless, there are so many marvelous things embedded in this system that it’s difficult to really know where to start. Take those precious cards you acquire throughout play, they each tie to one of the six regions on the map. This is relevant because if another player controls the location of the card you wish to play, you must pay them a bribe. Of course, they can waive the fee at their own discretion, likely at the cost of leveraged promises down the line.

Some allow you to place your pieces on the board and participate in the area control portion of the design. However, if you ever lose all of your tribes in a territory you must discard from your tableau each card of the Political suit matching the area. Similarly, if your last Political card of a specific region is betrayed with a special action, then you must swipe away all of your followers in that paired location. This is brutal as the land undulates before you, coughing up your people and power like yesterday’s rotten lamb.

Scoring is likewise nuanced. You have this smooth little wheel that clearly displays your current allegiance to either the Russian, British, or Afghan coalition. Like a badge you’re too proud to wear upon your chest, it sits on the table and wearily displays your current disposition. You can switch this rather easily throughout the course of play, but in doing so you give up any progress you’ve made with your previous coalition.

Throwing in with one of those nasty occupiers has a few benefits. You can utilize those deployed troops to wipe out other factions and even players. This is easily done if you’ve acquired battle actions in your tableau, and there’s precious few ways for a player to defend their tribes from violence. What’s even more beautiful is that another player may have been the one to deploy all of these soldiers, and then you swoop in and corral them like a cloud of bees to be wielded as blade or musket.

More important is the coalition’s role in scoring. Shuffled in regular intervals throughout the market deck are these Dominance chaps. When such a card is triggered play pauses and scoring is conducted. You must first assess whether a faction is “dominating”, which requires a particular side to have at least four more armies deployed than any other. For this to occur players must have obviously spent a great deal of effort to bloat the board with armed troops and perhaps minimize the deployment of opposing coalitions.

If this is the case then you assess each player’s influence within that particular faction. Interestingly enough, this completely ignores deployed pieces and instead looks to how you have built your tableau with patriots loyal to the cause, what prizes you have taken from betraying played cards, and the quantity of gifts you have purchased to soothe your benefactor.

If a faction does not have a substantial lead in standing armies, then instead we look at how many pieces each player has deployed and award points in this manner. This is in stark contrast to faction dominance, putting players in an alternate position of following two distinct competing vectors of achievement.

The Dominance system is remarkable. It’s a wide divergence from the Pax series as it rewards incremental point gains throughout play instead of simply handing the game over to a winner at a crucial moment. This may be slightly less dramatic, but it affords maneuvering room that fuels tactical discussion and short-term politics. For instance, counter-intuitively you may push to trigger scoring early even if another player will gain more points than you. As long as you personally move closer to first overall, there is incentive to harness the chaos and pull the trigger before the situation changes.

This mechanism allows for unexpected shifts as a player swaps allegiance, throwing the social environment into disarray. In my last session another player and I pushed the British coalition hard, leaping out to a dominant lead in presence. Before scoring occurred a third player deftly slipped into our Faustian pact and quickly pumped money into the coffers of our foreigners, ascending in short term to the head of our small tribe. It was jarring and I had to shift instantly to a new strategic option and refocus my efforts. 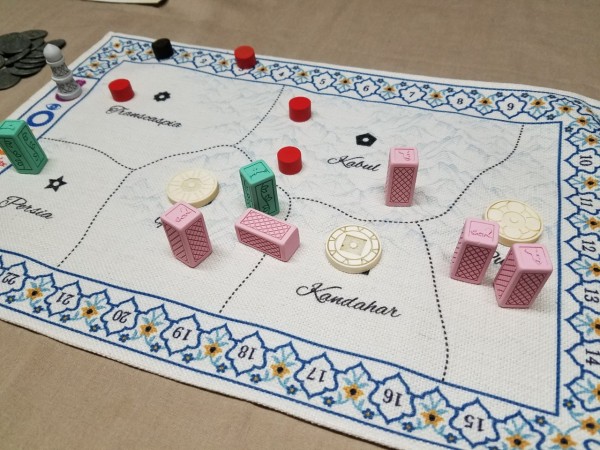 This is a resilient design. It scales well, providing a gripping experience for 3-5 participants. At the higher end of the spectrum there will be more turnover in the market and it’s a little more chaotic as your agency is reduced. However, more hands in the pot also cause increased conflict as play leans into the coalition structure with alliances propping up and being battered down. At three it still works well with little adjustment and the commitment is closer to 90 minutes as opposed to 120. The texture of dynamic team play is less nuanced or rich, but you still experience the bulk of what Pax Pamir has to offer.

Despite playing a half dozen games of this, I’ve yet to tackle the included Wakhan AI system. This allows for solitaire play as well as propping up the otherwise fragile two player mode. Sans Wakhan the head to head match-up is extraordinarily brief and swingy; a single powerful move may cascade into an untenable board state and quick victory. Yet I’ve been so enraptured with this design as a multiplayer endeavor full of negotiation and rivalry that I may never make it to the Wakhan.

There’s a lot going on in Pax Pamir second edition. It has that signature Cole Wehrle sandbox design element that I’ve come to adore. You may not interact with a whole subset of mechanisms in a single play, unexpected events will occur, and you will twist and contort to try and slip through the gap and come out the other side.

Most compelling is the expression of theme. Your country starts a blank canvas, solely occupied by round wooden discs representing tokens of power for you to plumb. Expressly through player action those heavy military blocks appear. As everything develops, the alien forces may swarm or wither, and it’s entirely up to the actors at the table.

It’s difficult to ignore the continual question of who exactly is using whom. Scoring suggests a selfish circle of wrapping your fingers around your ally’s hand and helping to tighten their grip. It’s difficult to shake the perceived cost as you’ve sacrificed something integral in your pursuit. Slowly the realization creeps into your conscious that you’re caught in the fist as well and slowly squeezing yourself.

Look at the map after a successful dominance check. We’re told a period of peace now occurs as all of the armies are swept to the bin and we start anew. What else has happened as a result of this cleansing? What’s the cost of peace? Who else has been brushed into the gutter?

Those questions reside just below the surface, melding with a dozen others and challenging our cognitive flex. This is a game that is not easy, as its efficient rule-set births an opaque strategic landscape that demands attention and care. It’s one of those titles that will leave your mind restless and engaged long after the pieces have been put away and the brutality has subsided.

Pax Pamir second edition sits comfortable at the table, confidently trading wisdom and insight with John Company and Root while everyone else is listening in silence. If nothing else, this title has cemented the past three as the years of Cole Wehrle.

A review copy was provided by Wehrlegig Games.

← The Mean Streets of Brook City
Does the World Really Need Us, Rangers? A Power Rangers: Heroes of the Grid Review →